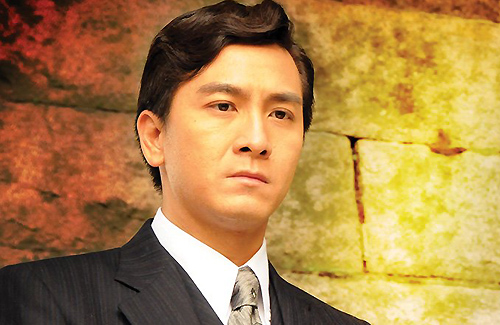 Kenneth Ma’s (馬國明) efforts culminated to a breakthrough in his career this year. His popularity surged dramatically after portraying doctor, Cheung Yat Kin, in The Hippocratic Crush <On Call 36小時>. Kenneth’s performance made him a dark horse in this year’s TVB Best Actor race and earned him a nomination for My Favorite Male Character award.

No Ambition to Win TV King

The ever-practical Kenneth said that he retains a competitive spirit towards the TVB Anniversary Awards, but does not have ambition in winning TV King this year. He noted that there are many contenders for TV King this year, such as Moses Chan (陳豪), Raymond Lam (林峯), Wayne Lai (黎耀祥), and Damian Lau (劉松仁) each with their own share of supporters.

“There are many possible outcomes for this year’s TV King. The hot favorite may not definitely win. Since this is the first year that the TV King is voted by the audiences, there are many unknown factors. I do not lack complete confidence, it is just that I do not have great ambitions. I will still have opportunities in the future, such as next year’s Triumph in the Skies 2 <衝上雲霄II>, Season of Love <戀愛季節>, and Cold Mountain, Hidden Dragon <寒山潛龍>. I will do my best to portray my roles and not loosen my efforts. I have a competitive spirit and will take initiative at times, without waiting at the same spot all the time. However, I have to let TVB arrange some matters and cannot leap to heaven in one single step.”

Kenneth felt embarrassed to campaign for himself. He felt that if the audience liked him, they will vote for him without his need to pull votes for himself. If he does win the My Favorite Male Character award for The Hippocratic Crush, Kenneth will be very happy.

When he spoke of his favorite scenes in Silver Spoon, Sterling Shackles <名媛望族>, Kenneth was full of excitement. “I like the scene where I beg my mother, Mary Hon (韓瑪利) to allow me to marry Rebecca Zhu (朱晨麗). I do not wish to follow the footsteps of my father, Damian Lau (劉松仁) and want to marry the person I love instead.”

Although the 4oth episode of Silver Spoon, Sterling Shackles will not be aired until December 14, Kenneth revealed that the love triangle  between Rebecca, Ron Ng (吳卓羲), and himself will have a tragic ending. After marrying Kenneth, Rebecca will have an affair with her first love, Ron. Each person will go their separate paths.  “We each put in immense efforts to portray the love triangle and hope that the audience will enjoy watching the drama,” Kenneth said.

With his excellent acting and team player attitude, Damian Lau (劉松仁) is an actor that Kenneth admires greatly. “I wish I can ask Damian to become my sifu, but I know he doesn’t take any students.”

Following In the Chamber of Bliss <蔡鍔與小鳳仙>, Silver Spoon, Sterling Shackles is the second time that Kenneth has partnered with Damian. TVB’s resources were severely challenged after the resignation of many scriptwriters during the filming of Silver Spoon, Sterling Shackles. Due to Damian’s knowledge of Hong Kong under British rule in the 1930s, he helped edit the historical details but did not revise the script, as previously reported. Despite the filming obstacles, the cast was very united and portrayed their chemistry onscreen.

“Damian said that it is rare to encounter such challenging filming circumstances once again. So we will not mind the ratings results, as long as we all enjoyed the filming process.”

Like Damian Lau, Kenneth Ma is an actor that enjoys the acting process more than winning awards. While Kenneth feels that this year may not be his year to win TV King, his passion for acting remains unchanged. Kenneth will continue to be a pillar in TVB dramas for years to come.