Kenneth Ma Hints At Open Ending For “The Hippocratic Crush” 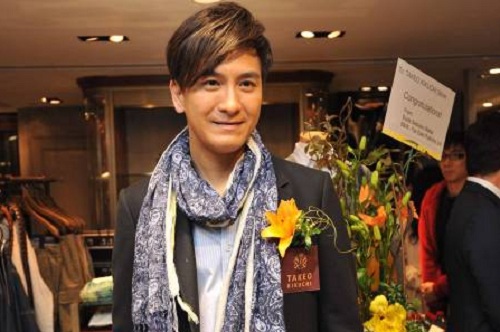 Hong Kong TVB actor, Kenneth Ma’s (馬國明) popularity with audiences and advertisers soared recently due to landing a breakthrough role as a neurosurgeon in currently aired medical drama, The Hippocratic Crush <On Call 36小時>. The 38-year-old professed that he was eager to improve his income this year and save enough money to purchase a larger 1,000 square feet condo to live with his family.

Yesterday, Kenneth appeared as a guest at the ribbon cutting ceremony for Japanese men’s wear store, Takeo Kikuchi. The normally casual Kenneth donned an outfit from Takeo Kikuchi’s 2012 Spring/ Summer Collection, appearing suave and trendy. Kenneth’s performance and handsome doctor image stimulated the audience’s interest in his past educational and romantic background. Kenneth was dubbed as one of the most eligible “diamond bachelors” at TVB, a title which he casually shied away from. Many wondered whether there was a possibility in which he will reconcile with ex-girlfriend, Nancy Wu (胡定欣).   In other news, Kenneth was reported to have gotten along well with 2011 Miss Hong Kong winner, Rebecca Zhu (朱晨麗), who portrayed his wife in new drama, Prominent Family <名媛望族>. Filming a scene in which Kenneth rescued Rebecca from the sea earlier, the pair bobbed in he water for over an hour, in which Kenneth continuously cracked many jokes to make Rebecca laugh.

Kenneth revealed that The Hippocratic Crush will feature an open ending, which would faciliate for the filming of a sequel should TVB decide to do so.  Kenneth told On.cc, “Recently, the audience scolded that the endings for many dramas were poor. I believe this will not happen for The Hippocratic Crush. The ending is pretty good.”

The series’ finale will be broadcast on Friday, March 16th, in which Kenneth hoped to gather with the cast and crew to watch the ending together over a meal. Kenneth hoped that  the ratings will continue to climb higher, beating the average ratings of 33 points for this week to-date. Should the ratings be colossal, perhaps next year, the public can see the return of “Cheung Yat Kin” on the small screen!