Kenneth Ma, Mandy Wong, and Moon Lau Out on a Date for “The Exorcist’s Meter 2.0” 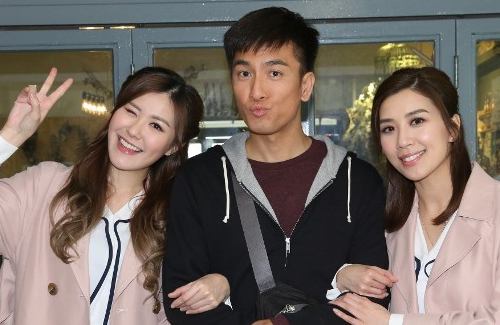 The cast of TVB’s The Exorcist’s Meter 2.0 <降魔的2.0> including Kenneth Ma (馬國明), Mandy Wong (黃智雯), and Moon Lau (劉佩玥) met the press yesterday while shooting an outdoor scene for the supernatural drama, which continues the story of a taxi driver who has the ability to fight supernatural beings.

The scene was about Kenneth and Mandy, who play a couple, spending time together at a painting event. Moon’s character, who has a crush on Kenneth, possesses Mandy’s body to date him.

Mandy plays a doctor who also has the ability to fight demons. There will be a dream sequence scene where she and Zoie Tam (譚凱琪) will be dressed in sexy demon-fighting outfits for Kenneth’s character. Mandy seemed disgusted at the thought, to which Kenneth said, “You wouldn’t wear a turtle neck to be sexy, right?” Mandy joked, “Anything can look sexy, even lab coats!” Kenneth argued, “Only if you’re not wearing anything underneath!”

The scene they had just shot was a pivotal scene for Moon’s character. The 29-year-old was so anxious about the scene that she even lost sleep the night before.

As for whether or not her character will have a love interest of her own, Moon said, “I really don’t want Hubert Wu (胡鴻鈞) again! We’ve been a couple for several dramas already. We can’t force happiness! Sometimes it’s better to be just by yourself. Next time we can play mother and son!” she suggested.