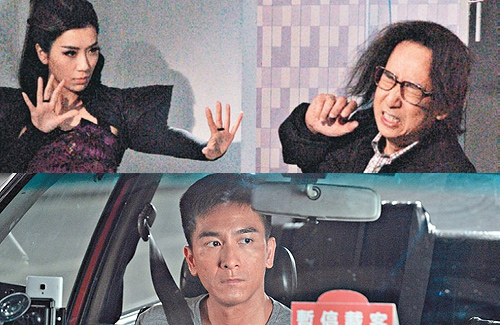 Starring Kenneth Ma (馬國明), Mandy Wong (黃智雯), Moon Lau (劉佩玥), Hugo Wong (黃子恆), and Hubert Wu (胡鴻鈞), The Exorcist’s Meter (降魔的) will begin airing on October 30. The drama does not follow the typical horror genre, but rather adds elements of love and friendship into its storyline.

Kenneth will portray a taxi driver working the graveyard shift. One night, he unexpectedly woke a spirit, played by Hubert. Due to this incident, Kenneth’s third eye was opened, allowing him see ghosts and demons. With this newfound power in the modern-day world, Kenneth takes on the ultimate task of conquering and slaying demons.

This drama may also tap into Mandy’s acting skills and be a potential breakthrough role. The 34-year-old will portray two roles in the drama as both a doctor and a demon. “Both characters are very different. The presentation of the demon character is unique. The outfit is custom made. There were no limits on how I portrayed the character, so I had freedom in this regard. This character also has a seductive feel to it. There are some scenes where I would show off my legs, but the main draw is using my eyes to seduce Kenneth and Hugo.”

Excited about the opportunity to film a horror genre, Kenneth shared, “I think it’s quite appealing. The more scared the audiences are, the more they want to keep watching. Hopefully this theme will give the audience a sense of freshness.” Fortunately, the cast did not encounter any creepy incidents. However, crew members purposely created a spooky ambiance to get the actors into character, frightening Kenneth once.

Hubert, who is known to be slow to warm to people, took a lot of time to prepare for his role, where he had a semi-nude scene. The notoriously shy singer-turned-actor shared, “I was not embarrassed! I am quite familiar with the cast members. Everyone is just trying to do well together.”

In the drama, Moon will have a crush on Kenneth, while Hubert will take a liking towards her. Moon said, “There is a little bit of romance in the drama, but it is not the main storyline. Instead, the drama focuses more on friendship. It has also allowed me to become good friends with Kenneth, Hubert, Mandy, and Kayee Tam (譚嘉儀). We were very compatible during filming.”