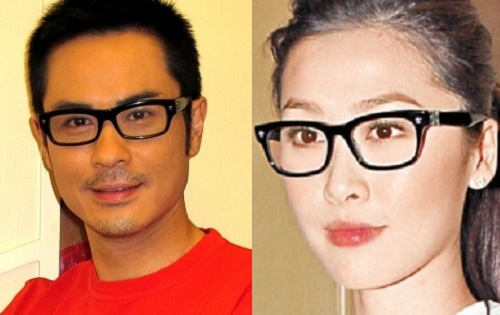 After filming TVB drama, Hard Fate <翡翠戀曲> in 2004, Kevin Cheng and Niki Chow started dating. They kept their relationship underground until breaking up in 2008. Although rumors claimed that Kevin had fallen for Charmaine Sheh (佘詩曼) at the time, Kevin clarified that he would only start a new relationship after ending an old one. He had implied that he was not the type of man to be dating two women at the same time.

Four years later, Kevin is once again caught in an unclear love triangle with two women.  At Toby Leung’s <梁靖琪> wedding in December 2011, Kevin and Niki ran into each other once again. Although Niki was rumored to be upset at Kevin since their breakup, the meeting at Toby’s wedding settled their differences and rekindled their mutual feelings.

Although dating textile company heir, Eric Cheuk, for two years before breaking up last year, Niki reportedly still loved Kevin and was unable to forget him. Each time that Niki was in Shanghai or Hengdian, she allegedly sought Kevin out.

Sharp-eyed netizens found “evidence” in Kevin and Niki’s reconciliation. A photo of Kevin eating at a cafe in Hong Kong circulated last week. At the same time, there was a photo of Niki eating at the same restaurant and even at the same table! It widely speculated that they had shared a recent dinner date.

Kevin and Niki were also spotted wearing matching “lovers” accessories, including the same straw hat and pair of glass frames. Niki wore her new glasses as early as April, in which she reportedly stated that she purchased the glasses in Japan; the frames were part of a collection with matching designs for couples! Was it a coincidence that Kevin happened to have the same pair of glasses as Niki?

While filming Ghetto Justice 2 in October 2011, Kevin Cheng was rumored to be interested in Christine Kuo. Portraying his ex-wife in the drama, Christine and Kevin shared intimate kissing scenes. Kevin often engaged Christine in conversation and even took many photos of themselves together during filming breaks. Since last year, it was reported that Kevin possessed very good feelings towards Christine and often guided her through their scenes together.

At the cast dinner for the premiere episode of Ghetto Justice 2, Kevin reportedly kept his eyes on Christine all night, even accepting drinks for Christine when costars offered her alcohol. The pair allegedly kept their relationship underground because they did not  wish to deal with public pressure.

It was reported that Niki was nonchalant towards Kevin and Christine’s involvement and continued to seek Kevin out. At the costume fitting for new TVB drama, A Good Heart Goes Haywire <好心作怪>, Niki once again refused to comment directly regarding rumors that she and Christine Kuo were fighting for Kevin’s love.

Niki also denied rumors claiming that she and Kevin had met up in mainland China earlier.

Refusing to comment on whether Kevin and Christine made a compatible pair, Niki only said, “Perhaps everyone knows I am single. Without anyone right now, such rumors will surface. I have no control over such things, so I will not pay attention!”

When prompted that many people hoped to see Kevin and Niki reconcile their romance, Niki said, “Hmm…I do not know what to say!”

Appearing at a promotional event today, Christine Kuo indicated that she did not know that Kevin and Niki had reconciled their relationship. Instead of feeling jealous, Christine said that she will send her blessings to the couple if they were indeed back together.

Christine said that she did not pay attention to such news reports and will only focus on her work. When pointed out that Kevin treated her especially well during the filming of Ghetto Justice 2, Christine replied, “He is very fair; he treats men and women in the same manner.”

Asked if she and Kevin will have additional advancement opportunities, Christine said that Kevin had no time and she will only focus on her work. Their romantic developments were only restricted to the screen and they did not remain in touch privately.

This article was updated on August 13, 2012 at 5:12 PM to reflect additional details of Niki Chow’s response regarding reconciliation rumors with Kevin Cheng.