In the upcoming Yuen Woo-ping (袁和平) film Master Z: The Ip Man Legacy <葉問外傳：張天志>, Kevin Cheng (鄭嘉穎) plays the main villain Cho Sai-kit, who goes through extreme methods to succeed his father’s triad empire, which is currently in the hands of his older sister Cho Ngan-kwan, played by the legendary Michelle Yeoh (楊紫瓊).

As the film’s main villain, Kevin has a hand in carrying the show’s actions scenes alongside his costars. Kevin recalled one scene where he crashes through a table, shattering in, in a fight with Max. Although they have rehearsed the scene several times, Kevin still sustained an injury to the neck after performing the stunt. 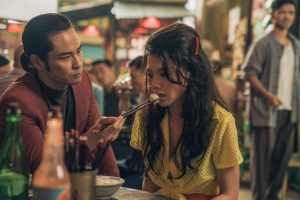 “I wasn’t being careful enough,” said Kevin. “I remembered to lock my neck on the first try, but didn’t on the second try, so I pulled pulled a muscle. Even stunt actors often get injured from simple moves like that. This is a Master Eight (Yuen Woo-ping) action film, so I hope to do the best as I can to his satisfaction.”

The former TVB actor rarely gets the opportunity to play a villainous role. He said, “Playing a villain is easier than playing a good guy, but because this is Master Eight’s film, I don’t know what his standards are. On my first day of work, I had to slap Chrissie Chau, and that was a very scary moment. I slapped her three times, so much until her cheeks swelled up. Then, I had to stuff her mouth with drugs, and I nearly choked her.”

Kevin said he has been a fan of Yuen Woo-ping’s films for as long as he can remember. “I’ve watched movies like Snake in the Eagle’s Shadow <蛇形刁手>, Drunken Master <醉拳>, to Crouching Tiger, Hidden Dragon <臥虎藏龍> and The Grandmaster <一代宗師>. I’m so curious to how those scenes were filmed. It turns out that he has very high standards. I told Master Eight to let me fight a bit more. I may not be as experienced as Max Zhang, but I can do simple moves here and there.”

Master Z gave Kevin many firsts. Besides it being his first collaboration with Yuen Woo-ping, it was also his first work with the legendary Michelle Yeoh. He still remembered their first conversation, “Of course, I’ve definitely seen her films before. This time, she plays my older sister. When we were waiting for the cameras to role, I asked her what she has been busy with. If I didn’t hear wrong, I think she’s been shooting the new Star Wars film. I really wanted to ask her if the lightsabers really lit up, but would that be too stupid of me? Then I told her I really liked one of her films, and when she didn’t go on, I felt I had to keep going. I then asked her about being the Datuk of Malaysia, and wondered if that is any different from Hong Kong’s MBE. She told me it’s just a title, there isn’t much of a difference, but it is more convenient for business, but she doesn’t do business. Then the conversation stopped again. When she told me she lives in Paris, I knew I had to stop. I didn’t know how to continue the conversation from there, haha! Might as well work hard with filming.”

Although it has been over 25 years since his debut, retirement is out of the question for Kevin. The former TVB actor and the two-time TV King still has much to explore and learn in the entertainment industry. “I’m in my cultivation stage,” he said. “Slowly cultivating.”

Is his final goal Best Actor in film? He said, “That is too far way. Right now, I am making it a goal of mine to do what I want to do. I don’t know how long I’ll be doing this, but I look forward to playing roles I haven’t played before.”