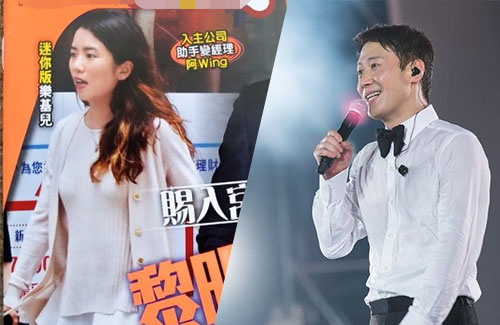 Leon Lai (黎明) has always been very private about his love life, especially after his divorce with Gaile Lok (樂基兒) in 2012. But according to the Hong Kong paparazzi, those dry years may be over for the Heavenly King. On Thursday, the Hong Kong media reported that the 51-year-old singer-actor could be dating his female assistant Wing, also a divorcee. Wing is currently 32 years old and holds a managerial position at Leon’s record label, Amusic. She was briefly rumored to be Aarif Rahman’s (李治廷) girlfriend when she worked as his assistant a few years ago.

Another Hong Kong tabloid magazine followed up with the rumor later that day, reporting that Leon and Wing had started their relationship in 2015. The rumored couple managed to cover up their relationship through the support of mutual friends—around February to March 2017, Leon had treated a group of friends to Dubai for a vacation, but soon after they landed, he and Wing transferred to a different flight en route to the Maldives. During the Lunar New Year holidays, it was reported that Leon and Wing went overseas for a skiing trip. Allegedly, they had planned on going to another overseas trip this month, but because their relationship has now been exposed, Leon and Wing has no choice but to cancel their travel plans.

According to industry insiders, Wing was never very well-received within the staff at Amusic. Her rumored relationship with Aarif was said to be one of the reasons why she divorced her husband in 2012. Wing also reportedly used unethical means to get Aarif jobs; one insider recalled Wing lying to a promotor about an Amusic artist being unavailable for an overseas project, but recommended Aarif for the job instead. The Amusic artist was furious, but decided not to pursue further action.

After divorcing her husband, Wing started dating a makeup artist called Bill. Through her connections, she managed to make Bill Amusic’s main makeup artist, but that in turn led to Bill’s original agency to report Wing for breaking the contract.

Leon and Wing’s representatives have yet to confirm or deny these reports.