Tales of a Cha Chaan Teng Over 3 Generations 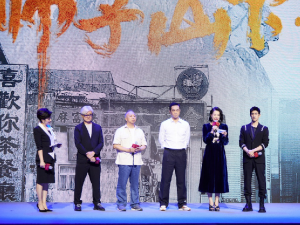 Narrating a string of events starting from Hong Kong’s handover to China in 1984, the drama will showcase heartwarming tales at a Hong Kong style café passed down for generations. Besides the expansive storyline, the strong crew of veterans including producer Lee Kwok Laap (李國立), director Ng Gam-Yuen (吳錦源), and critically acclaimed screenwriter Ella Chan Po Wah (陳寶華) is another draw.

Focusing on Chinese entertainment since leaving TVB, Myolie had confided at the start of the year about her difficulties securing lead roles in China. Being confirmed for the role is surely happy news, and she will be able to speak her lines in Cantonese too!

As lead actress Myolie shared, “Ten years ago I had a fleeting encounter with producer Lee, and am glad to work with him after a decade. As for director Ng, he was behind my first-ever Chinese drama Beauty’s Rival in China <美人心計>. Also, everyone knows what a great scriptwriter sis Bo Wah is.”

Set against the backdrop of Hong Kong’s tumultuous socio-cultural changes, the story will play out at the cafe, showcasing the stories of three multigenerational families while weaving in this unique part of Hong Kong culinary culture.

While it will be Myolie’s first time working with Aarif and Huang Jue, she was delighted to find out that Huang Jue could speak Cantonese, especially since the drama would be filmed in the lingo. Aarif, on the other hand, also impressed the actress with his good command of Mandarin, another plus point for Myolie, who is satisfied with this “tall stature and fairly good acting.”

As the story is set to span over three decades from 1984 to 2021, Myolie will be challenged to portray the transformation of her character from youthful to mature woman, for which she will need more detailed discussions with the producer. Having wrapped up filming for a medical-themed series recently, Myolie updated fans that she will be spending time off with her family in Hong Kong, before filming for the series is set to commence in China.

This article was written by Joyce for JayneStars.com