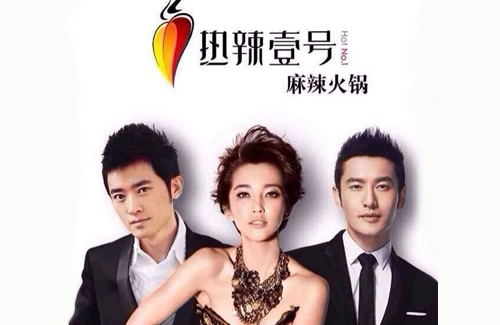 After Li Bingbing (李冰冰) and Ren Quan (任泉) watched American Dreams in China <中國合伙人> together, they were so inspired that they decided to invest in a restaurant together. They invited American Dreams star, Huang Xiaoming (黃曉明) to join them in the business venture.

Li Bingbing and Ren Quan were in Beijing for Hot No. 1’s opening ceremony last month. The restaurant specializes in spicy hotpot broths, and generated excitement with its opening due to the celebrity owners. Because of his filming commitments, Huang Xiaoming did not attend.

Aside from their restaurant venture together, Li Bingbing and Ren Quan also invested in a film together. Temporarily titled, Zhang Zhen’s Stories <張震講故事>, Li Bingbing and Ren Quan will co-produce the movie together. Li Bingbing joked that Huang Xiaoming was not invited to invest in the film as a punishment for not attending the hotpot’s opening ceremony. She also revealed the earnings from the restaurant will be split equally among the three partners.