Louis Koo Has a Blood Clot in His Brain 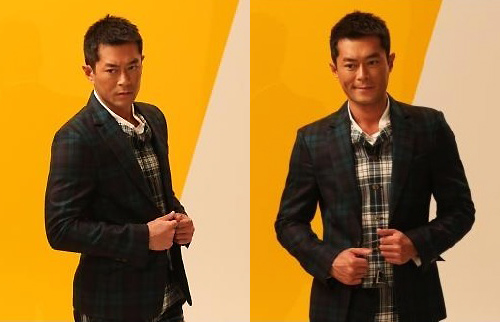 Louis Koo (古天樂) is the “perfect” man. He is handsome; he is a gentleman; and he is rich. When he is not busy filming, he will spend his free time with friends, family, and working for the Louis Koo Charitable Foundation, an organization that has since aided to the funding of 49 schools in mainland China.

But does true perfection exist? Even Louis does not have an answer to that question. Despite having all the credentials that are required for being a good husband, the 42-year-old remains a bachelor. Maybe Louis’ perfect life is not so perfect as we all assume.

“I am sick,” Louis confessed. “I have a blood clot in my brain. Even if it gets healed, I can suffer from amnesia at any moment!”

Friends and even Louis himself often teased his forgetfulness, but there is actually a reason behind his poor memory capacity. Louis has cerebral hypoxia.

“My mother didn’t have a smooth birth. I lacked oxygen when I was in the womb, so a blood clot formed in my brain. I didn’t find out about this until I was a teenager. There were times when I would just sit there and blank out without realizing it. There were also times when I would go blind for five to six seconds. I didn’t know this was a disorder at the time, so I didn’t do anything about it. I didn’t realize how bad it was until I was older. The doctor told me that I had [mild] cerebral hypoxia. In addition, I also got in a car crash when I was younger, and injured my head. Both of these incidents were the cause of my temporary blindness. After long-term medication, I am feeling a lot better now. I feel blessed.

“I was born with this disorder. As long as I can overcome it, it shouldn’t be a problem. Maybe my amnesia is because of that. Even the doctors didn’t know why I have amnesia! For example, when I was shooting Triple Trap <鎗王之王> with Charlene Choi (蔡卓妍), I told her that we had already worked together in two to three films, but she told me that we actually collaborated in nine films! She even listed them all to me, and it’s true! It is nine! This amnesia doesn’t happen to me all the time, but it still happens once in a while.

“You ask me if I suffer from emotional problems too? The good thing about this amnesia that I have is that I get to delete certain things – the information that gets stored in my brain for too long automatically gets deleted after a few years. Another good thing is that when I am filming, I will not give myself too much pressure and stress. I actually think this [memory loss] is my gift from heaven.”

But what about marriage? Hypoxia and memory loss should not stop Louis from getting married! “Loner? I’m used to it! Resting is the most important thing in my life now. I have no problems with being alone. Sometimes, there are things that only you, yourself, have to face. It’s not called being a loner. Some people need to have others with them in order to get a sense of security. I never needed that. Not even when I was growing up. I solve my own problems.”

Maybe Louis does not want someone meddling in his bachelor life? “Not at all! My parents used to do that for most of my life. It’s not that I don’t want someone to look after me, but I think we should all have our own lifestyle. As long as you are willing to speak and listen, you’ll learn new things and you’ll digest the information yourself.”

“I Have Nothing to Give to My Parents”

Louis’ entrance in the entertainment industry was rather smooth. After getting a few gigs as a model, TVB asked Louis to join their company and gave him a meaty character in his first supporting role in a TVB drama. Louis had a dusty future, but his parents supported him the whole way through.

“I really don’t have anything to give to [my parents], but they, on the other hand, gave me everything. Right now, I am cherishing the time I’m spending with them. They are older now, and I will do my best to satisfy their needs. Now, I feel like my father has become a child. He had a stroke, so there are a lot of things that he can’t remember; my mother is like a rebellious child – she’s never home. I always have to ask her why she’s leaving home so early and coming back so late at night! That is outrageous!”

Louis expressed that his mother has given her entire youth to him and his younger brother; it is impossible to repay his mother with all the things that they have taken from her. “My father gave me everything. After graduation, he married, and then they had my younger brother and I. They really didn’t know what was going on in the world at the time! In other words, their whole lives literally revolved around my brother and myself, but at least they have a family. Now, they have the opportunities to learn whatever they want to learn, and do the things that they never got the chance to do forty years ago!

“But one thing that drives me nuts though is that they are interested in singing opera! I get home, really tired and cranky, and I really don’t want to hear their singing voices screaming around the house! And I need to wake up early the next day! It is quite funny when you think back. Another interesting tidbit is that my father has really become a very fashionable man. He doesn’t even know what he’s wearing most of the time!”

The Parent of His Parents

It is sweet to his see his parents reviving their youthful vigor. There is something interesting to look forward to every day after work. “I never really leave the house unless I’m out of town. I actually have some friends who don’t have my mobile phone number, but only my house number. They know that if I’m not at work, I’m usually at home, doing the housework, and doing the cooking.”

Being the parent of his parents does get quite tiresome, but without the patient cultivation and love from his parents, Louis’ “parenting skills” would definitely go haywire.

“The two elders taught me that we must be thrifty! We must not waste food, and we always eat our refrigerated leftovers. We must not spend carelessly. This is basic behavior that my parents have drilled me into practicing since my youth.”

Although blessed with a smooth-sail acting career, Louis has not always been Hong Kong’s favorite actor. He was once criticized for his unoriginal and repetitive acting style, but Louis accepted the criticism and worked on improving himself.

“There are different ways to act in different films. There isn’t really a standard way. Acting really requires you to know how to react to different situations – or you can come up with an entirely new technique on your own. Some people say that one who acts must be one who has the most life experience. The more experience, the more information you can gather for your acting. Some people will film a movie every several years, and use their free time to go out and experience different lives. It’s a method approach. There are also those who will film as many movies as they can at once, to learn how to experience different lives through different roles, and their acting will eventually improve. I am the latter. I choose to do more movies!”

But where is Louis’ Film King award? The former TVB actor has won two TV King titles already – with Louis’ current acting prowess, the opportunity to win Best Actor is not far in the future. Will Louis continue to accept new films with different roles and challenge himself?

“When I am accepting a new film, I have to ask myself why. It is because of the good price or is it because I really like the script? Cop films like Infernal Affairs <無間道> and Cold War <寒戰> are Hong Kong specialties, and it’s a great challenge to film something that is generally the same thing but with a different flavor. But how many audiences are willing to accept this difference in flavor? It’s unpredictable. There are still many professions that haven’t been done in [Hong Kong] film yet – such as astronauts. That’s fresh, but will the audience find it believable? The hardest part of making a film is the origin – the blueprint.

“Asking me if I want to win an award is like asking me if I would win the lottery. I cannot control what happens. It is out of my league. I will try not to think about, and will work hard in each and every one of my films. Each film does have its own life, direction, and fate. There will always be times when one year will be the year of the movies when competition is heavy, but there are also those years when competition is weak. It’s important to just do things that make you happy.”

What about his thoughts on money? Although hear earns at least $100 million HKD per year, Louis is a saver more than a spender. Glitz and glamor is not a life for Louis. “When you need money, it will be there. When you don’t need, it won’t be. No one is telling you to spend all your money as soon as you get it. The most important thing to understand is what money means to you – you must learn how to spend your money. I’m not a spender. I only used it to buy food, or clothes when I need it for work. Other than that, I just wear the same pairs of clothes every day. I don’t buy cars; I don’t buy houses.”

That is the Louis style. Rich, but poor. Handsome, but flawed. So what?