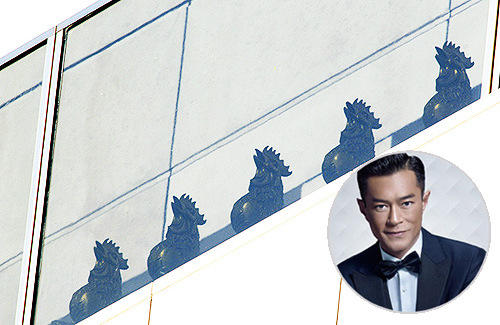 Though feng shui cannot be proven with science, many of Hong Kong’s top billionaires and entertainment personalities believe in it. Seen as a rising entertainment mogul ever since he established his own film production company and becoming the President of the Hong Kong Performing Artistes Guild, Louis Koo (古天樂) is one of the most influential power players in the local film industry now. While Louis’ success comes with hard work and dedication, he also recruits top feng shui masters to bring him good luck.

For two decades, Louis followed the direction of feng shui masters to improve his career luck. Recently, the exterior of his $300-million-Hong-dollar home was seen decorated with various statues for luck and success in his career. Now that Louis’ career is stable, he appears to have altered his feng shui arrangement for a different need.

Louis was seen removing seven golden dragons and two giant horse statues from his second floor balcony that were reportedly known to bring him fortune and love in this life. In its place, Louis installed a copper leopard statue and a row of eight chicken statues with their beaks facing the streets. The statues looked impressive as they appeared to be protecting Louis’ house.

Commenting on the significance of Louis’ arrangement, a local feng shui master explained that the row of chickens were believed to help fight against illness. The chicken’s belly was inscribed with the word “fortune” to metaphorically transform into a phoenix and helped to create feng shui energy. With the sunlight bouncing on the chicken statues, it was equivalent to having eight phoenixes guarding the house to protect the inhabitants from evil energy and disease. It was believed that Louis specifically sought to protect himself against the COVID-19 pandemic through his feng shui arrangements.

In addition, the local master pointed out that Louis’ copper leopard statue would enhance the protective power around his house. The master added that the protective emblems outside Louis’ home would give good blessings and make him more prosperous.