The Wuhan coronavirus outbreak is still going strong, with no signs of stopping anytime soon. With 56 confirmed cases within its borders, Hong Kong is encouraging its citizens to stay home as much as they can. Many businesses have been affected, and schools are temporarily shut down.

Aaron Kwok (郭富城), who has been on tour in the United States, had no choice but to leave the city, but before leaving his home, he made sure his family was safe. Living with two young children and older parents, Aaron had to stay cautious. The singer recently added a “nine golden dragon” feng shui arrangement on the roof of his home as a move to dispel diseases. Aaron admitted that he added the arrangement to protect his family’s health. 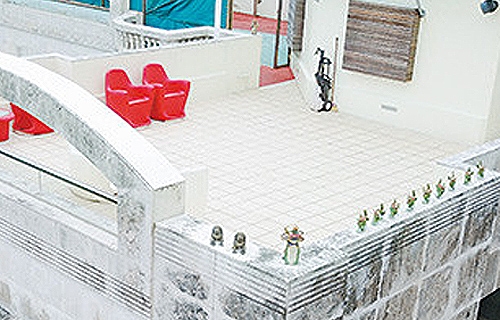 After several days of tracking Aaron’s family, paparazzi noticed that only the family’s domestic helpers were seen leaving their manor in the past few weeks. Aaron’s wife Moka Fang (方媛), their two-year-old daughter Chantelle and five-month-old daughter Charlotte, never left the house. Moka’s parents, who have been living with the family since their marriage, also did not step a foot out of the building. Their only chances of catching the sun was on the house balcony; the paparazzi has seen Moka’s father taking Chantelle out in the balcony a few days ago.

Many of Moka’s relatives still live in the mainland, but due to strict border controls to prevent the outbreak from spreading, Moka and his parents are stuck in Hong Kong.

Aaron has encouraged people to stay home as much as they can. “Don’t go out unless you absolutely have to. Schools aren’t open, so just stay in. My daughter can sing at home,” he had said.