“Love in the Buff” Brings Fame to Wanting Qu 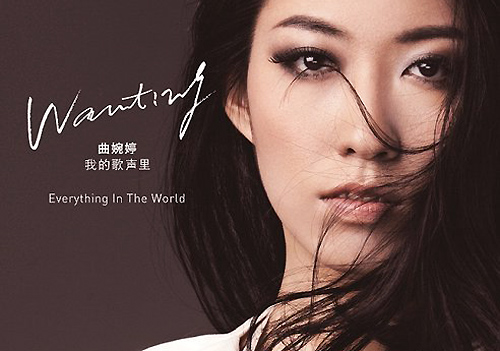 The current best-selling album in Hong Kong is not by a Hong Kong native, but by Wanting Qu (曲婉婷), a 28-year-old singer-songwriter hailing from Vancouver, Canada. Her debut full-length music album, Everything in the World, debuted at number one on Hong Kong’s IFPI album charts, and remained on the top spot for three weeks. Her best-selling single “Drenched” was the number one on iTunes charts for weeks before it was surpassed by Pakho Chau’s (周柏豪) “Death Row” (斬立決) earlier this month.

It was not an overnight success for Wanting. Born in Harbin, China in 1983, Wanting migrated to Vancouver, Canada for her tertiary education in 2000. Going against her parents’ wishes, Wanting insisted on studying music theory over business, and became estranged from her mother for many years. To pay for her tuition, Wanting spent two years working as a cleaner in various business institutions.

After winning a singing competition in 2004, Wanting formed a band, The Wanting Band, in 2005, and performed in small concerts around the country. In 2009, Wanting signed with Canada’s Nettwerk Music Group, the company that helped launched the careers of Avril Lavigne and Coldplay. Wanting is the first Chinese musician to sign with Nettwerk, and released her first compositional work, the self-titled Wanting EP, in August 2010 in mainland China.

In 2011, while Pang Ho Cheung (彭浩翔) and his cowriter, Jody Luk (陸以心), were going through a writer’s block for their script of the Love in a Puff <志明與春嬌> sequel, Love in the Buff <春嬌與志明>, a demo version of Wanting’s Drenched was playing on repeat mode n a Beijing café they were working at. They became inspired by the song, and finished off the script with the lyrics of Drenched in mind. Afterwards, they contacted Wanting and selected Drenched to be the theme song of Love in the Buff. The song, as well as the movie, became an instant hit. Wanting also contributed a second song, You Exist in My Song in the Love in the Buff soundtrack.

Wanting recalled, “I was not very familiar with the Chinese industry. I was suspicious at first because I didn’t know who Pang Ho Cheung was, so I secretly went online to check him out.”

Within one month of release, Love in the Buff earned close to $28 million HKD in the Hong Kong box office, and is currently the highest-grossing Chinese-language film in Hong Kong.

In the coming months, Wanting will focus her career in Hong Kong, and is currently preparing for her mini-concerts that will be held in Hong Kong and mainland China this September.

TAGS: Everything in the World, Love in the Buff, Pang Ho Cheung, Wanting Qu