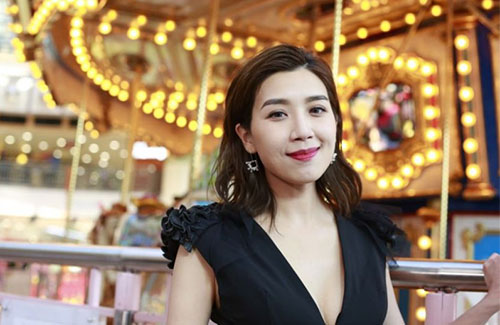 Benjamin Yuen plays trainee lawyer Kai, Evie’s pupil, who witnesses the manifestations of Evie’s different personalities. Evie’s first alternate personality state is the confident, feisty, and “crazy” Pina Colada, who is based on a manhua hero Evie idolized when she was a child. Pina Colada is a party animal, and she eventually gets into a one night stand with Dominic, played by Arnold Kwok. To help keep Evie’s personality disorder a secret, Kai pretends to have a crush on Dominic. Evie’s second alternate personality is an introverted, worrisome girl who has a crush on Kai. On playing the complicated role of Evie, Mandy compared the drama to taking a licensing exam. “I did a lot of research on this disorder, and I spent a lot of my time on the role. I added little things to each personality to differentiate them from each other, such as not wearing a bra when I play the crazy role. I got pretty violent too.”

Which personality was her favorite? Mandy immediately said, “I rarely play a role [like Pina Colada] and she’s very different from myself. For these kind of roles, I get to do a lot of freestyle. It takes me back to the days when I danced. It gave me courage and power, so I love her the most.”

Asking if playing such a complicated role had gotten Mandy to feel a little dissociative herself, she said, “There is one scene where all three personalities start talking to each other, and it was just me continuously talking to a mirror. That scene definitely got me feeling a little crazy.”