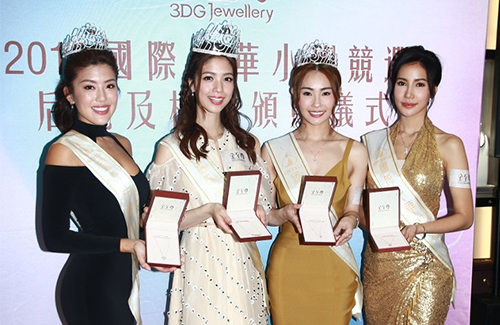 Our newly crowned Miss Chinese International Hera Chan (陳曉華), first runner-up Stephanie Wang (王慧媛), second runner-up Gina Wu (吳雅珠), and Miss Friendship Tevee Meesaeng (鄭子怡) attended their first post-pageant event today, promoting the jewelry brand that had sponsored the pageant. All the contestants went to a buffet together to celebrate the race’s end, and while Hera was unable to celebrate it with her parents, she did receive many congratulating messages.

All winners of the pageant would get various prizes, but Hera said she hasn’t thought about how she’s going to spend her prize money. “I don’t even know what I’m going to get, but as for the crown and the staff, I’ll have my parents keep them. It wouldn’t be in the house. 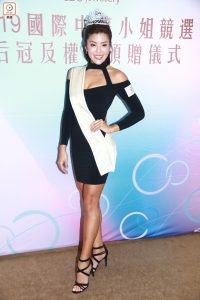 The double crown winner—who also won Miss Hong Kong 2018—said her only wish at the moment is to have a rest. “It’s been nonstop for me all year and I really want to take a break and rest my body so I can prepare for our upcoming events.” Hera expressed that she has watched her own performance, explaining, “Of course I watched the playback, especially on the part where I made a mistake. I think I did better than when I participated in Miss Hong Kong, because I didn’t look as nervous.”

First runner-up Stephanie Wang from Hawaii also said that she prefers resting over anything else. After the celebrations, Stephanie immediately went back to her hotel and slept. She shared that she will return home on March 6th, but will be coming back to Hong Kong to attend events. 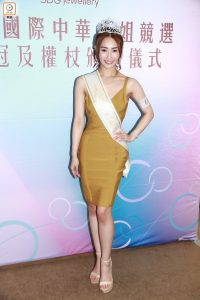 On whether or not the 27-year-old is interested in developing her career in Hong Kong, she said, “I do, because I feel like there are more opportunities here. However, I would need to practice my Cantonese. Right now, I can only understand a little bit.”

Second runner-up Gina Wu from New York shared that she wants to continue her pursuit of a dental degree after pageant promotions end. “Because of the competition, I had to put a hold on my education for an entire year. I want to continue to pursue my dental degree, which would take another five to six years.”