Moka Fang “Not Against” the Idea of Having a Third Child 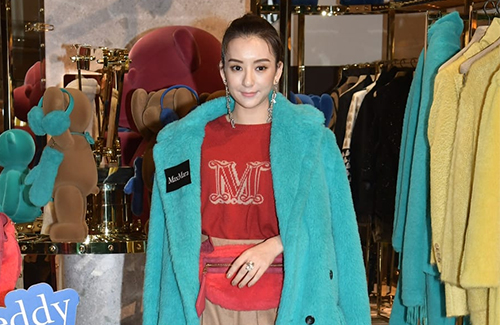 Aaron Kwok (郭富城) and Moka Fang (方媛) are happy parents of two beautiful girls, two-year-old Chantelle and 5-month-old Charlotte. But two may not be enough for the couple, as Moka has expressed interesting in chasing for a son.

Today, the Mrs. Heavenly King made a rare public appearance to attend a charity event in Tsim Sha Tsui. The model hasn’t had work for a while, but caring for her two children is just as busy, if not more, than her job. Now that Moka’s parents are living with her, she has time to attend to her jobs while her parents care for the young ones. She shared, “I’m really grateful of them. Even if I have a work, I can’t leave the house for long, because I’ll miss my daughters.” She added that Aaron has been very supportive of Moka’s decision to return to work.

Asking if she is interested in having a third child, she said, “I don’t have time. I’m busy enough with two kids. (Maybe chase for a son?) I’m not against that idea.”