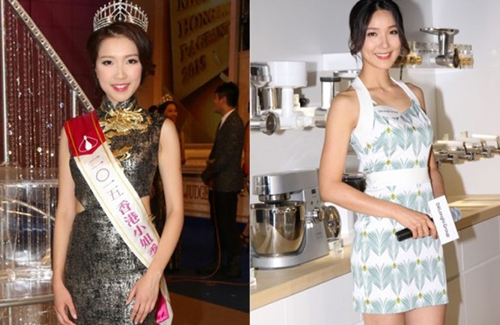 The 2015 Miss Hong Kong Pageant concluded on August 30 to public victory. 23-year-old Louisa Mak (麥明詩) won by a landslide, obtaining over 70 percent of the votes casted by the Hong Kong public. Known for having beauty and brains, the Cambridge law student already won the public’s favor when the pageant began in June 2015.

As many Miss Hong Kong winners end up becoming actresses for TVB, netizens have been actively discussing about what roles they could see Louisa, Ada, and Karmen playing in the future.

The sophisticated Louisa, a straight-A student and a law graduate from Cambridge, is most suitable to play lawyer roles due to her educational background. If TVB decides to green light a sequel for the legal drama Raising the Bar <四個女仔三個Bar>, Louisa would be the most perfect choice as the female lead. However, some netizens added that they are also interested in seeing a different side of her, suggesting that Louisa should try doing rebellious roles with an edgier character.

Ada, who has made headlines with her wealthy family background, is most suitable to play socialite roles. Netizens joked that Ada would be able to help out TVB’s costume department by wearing her own outfits.

Karmen, on the other hand, is being noted for resembling TVB actress and 2005 Miss Chinese International winner Leanne Li (李亞男). Netizens expressed that having them portray sisters would be convincing to the audience.