On air since February 2017, the sitcom Lo and Behold <愛 · 回家之開心速遞> has been the go-to television series for Hong Kong families to de-stress at the end of the day. For the past two years, Lo and Behold charmed television goers with its light-hearted characters, relatable stories, and humorous content, but a recent episode of the show had put viewers to tears.

In the episode, Big Sister (portrayed by TVB Anniversary Award winner Mandy Lam 林淑敏) started spying and following her boyfriend, Sung Shui-fai (Jack Hui 許家傑) around after suspecting him of cheating. She discovered that Fai and Szeto-Dukgu Ming-chu (Celine Ma 馬蹄露) had a transaction, in which Fai would donate his sperm to Chu. Though initially furious about the transaction, she was reminded by Hung Shu-yan (Pal Sinn 單立文) that she had been too selfish in their relationship. 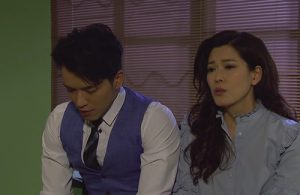 The episode was a drastic change to Lo and Behold’s light-hearted format—and viewers finished the episode feeling heartbroken. “It’s too brutal,” wrote one netizen. “I hope the writers will just leave Big Sister alone!”

In an interview with HK01, Jack Hui was asked to comment about the criticism of the story arc being too draggy. He said, “I don’t think now is a question of whether or not they should be together. It’s about whether or not there is progress, and progress is happening.” Jack said he has already shot later episodes, but is not in a position to spoil any more of the storyline. “I’m positive that many are interested in knowing what’s going to happen next. We hope to be able to send out more positive vibes. [Big Sister and Fai] have a fairytale romance—it’s the story of a wealthy girl and a poor boy.”