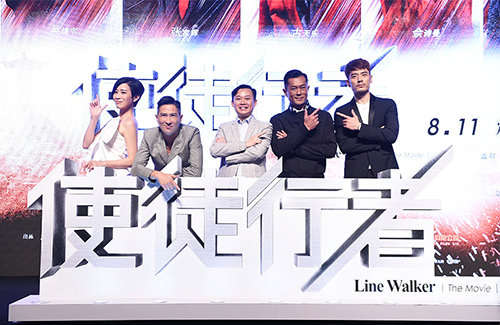 Though the movie primarily takes place in Hong Kong and Macau, a portion of the story is set in Brazil. A number of countries across the world had issued travel warnings about the Zika virus epidemic in Brazil, but the cast and crew insisted to shoot the movie in the 2016 Olympic nation, emphasizing the importance of the movie’s Brazil setting.

It was an unforgettable experience for the cast and crew. Though they were there to film a climactic gun battle for the movie, the cast learned then and there that they weren’t the only people who were shooting with guns.

Louis said, “We shot this scene at a forbidden area. Even the police weren’t even allowed in, so it was only the security protecting us. In the middle of filming, I heard gun shots that weren’t from our side. It sounded like there was a shootout going on. The director tried to ease the atmosphere by saying that someone was setting off firecrackers, but even he knew he was lying! In the end, we saw that the walls were all filled with bullet holes.”

Asking if he was scared about being next to a real gun shooting, Louis said, “Not really. We were in a protected environment. It’s more important to finish the job.” Nick joked, “Now we don’t need to add any sound effects in post-production.” Despite this little bump, filming for the movie went by smoothly and successfully.