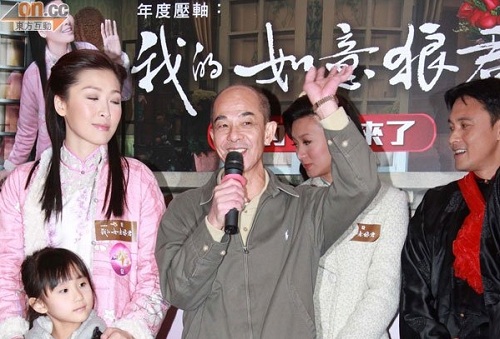 TVB series, Bottled Passion <我的如意狼君> featuring Raymond Wong (黃浩然) and Niki Chow (周麗淇), will be entering its final week of broadcast. Although the drama won good word of mouth, it lost in ratings. Producer Lee Tim Sing (李添勝) cursed at the poor ratings and even lamented in an interview program why the broadcast was delayed until the holiday season.

Tim Gor blasted, “Someone has to take the PK (cannon fodder) broadcast date! My past series, A Fistful of Stances <鐵馬尋橋>also suffered the same fate. I cannot be angry each time. Anyway, I am not the first one. It is unnecessary to say whether it was cannon fodder or not! ”

Tim Gor added, “You cannot lie about it; the ratings are only average. However, the word-of-mouth was good, which made the scriptwriters very unhappy! (Sigh) During the holidays, approximately 60,000 to 70,000 people leave Hong Kong. If the series were broadcast in a peak period, the ratings would likely be two points higher! Anyway, I am used to this!”

Tim Gor lamented, “Bottled Passion does not feature a big star-studded cast, which is largely anchored by Niki Chow and Raymond Wong.  Niki improved dramatically [in her performance], Raymond was very suitable for his role, and it was expected that Joel Chan (陳山聰) would perform well. I placed a lot of effort into constructing the story and everything was planned carefully. When it was initially announced that the series would be aired in October, I thought the series would definitely succeed. However, the programming department decided to delay its broadcast, citing some reason. They even apologized to me.”

Regarding his retirement plans, Tim Gor said that he will have a clear decision by next year. “I will be 65-years-old next year. TVB’s retirement age is 60; it is enough to have worked an extra 5 years already! Even if I possess the heart, I no longer have the ability! When colleagues see that I walk with a limp, they know that I am lacking physical stamina!”

Due to Niki Chow’s contractual issues, Tim Gor delayed the filming of Bottled Passion to accommodate her schedule. Niki possessed high hopes for the series. Since the ratings were mediocre, no wonder Niki appeared with a sad expression while shopping in the Central district earlier. However, her “friends around her” [implying 鄭嘉穎 鄭嘉穎] brought home numerous good news lately.

Jayne: Everyone may indeed be too busy for television from the Christmas through Lunar New Year holiday timeframe.  Ratings are not always an indicator whether a series is worthy or not.

This article has been updated with additional quotes from Producer Lee Tim Sing after additional information emerged in the evening paper.