Note: This is an original JayneStars feature detailing the canceled series that TVB had conceived, but never filmed. Written by Addy.

Do not be surprised at this ever-growing list of canceled TVB dramas. The Hong Kong power station introduces around 20 or more original serial dramas per year to their sponsors and investors, but not all of these dramas end up being filmed. Even if they do eventually receive the green light and development kicks in, production may ultimately fall through due to budget cuts or failed contract negotiations.

Whatever the reason may be for their cancellations, some of these proposed TVB dramas of the past sound epic and deserve some recognition. These productions may have been great successes if they were not axed from the studio.

Below is a list (part 1 of 3) of selected TVB dramas announced between 1999 and 2012 that unfortunately never made it to see the light of day:

First introduced at TVB’s Sales Presentation event in 1999, this modern comedy about Hong Kong working class individuals would have starred big comedian names like Cheung Tat Ming (張達明), Dayo Wong (黃子華), Wong He (王喜), and Florence Kwok (郭少芸). Not much about it is known today, but Tat Ming, Dayo, and Florence later teamed up for the period legal drama Justice Sung 2 <狀王宋世傑（貳）>, which was released in the summer of 1999.

As part of TVB’s Sales Presentation 1999 event, Lawrence Ng (吳啟華), Maggie Shiu (邵美琪), Elaine Ng (吳綺莉), and Felix Lok (駱應鈞) were tagged to star in the legal drama. Maybe this was intended to be another version of TVB’s hit legal series File of Justice <壹號皇庭>, which ended its epic run of five series after producer Gary Tang (鄧特希) left TVB in 1998. Interestingly, Lawrence later went ahead to star in an ATV drama that was also called Web of Law (officially known as The Men of Justice) ten years later, a legal procedural drama that was also produced by Gary Tang.

A few years later, TVB conceived another legal drama, The Legal Storm <律政風雲>, which was meant to be a throwback of FOJ, but that was ultimately put in the back burner.

The serial was originally about a pair of detectives who used their supernatural powers to solve murder cases. It would have starred Wong He and Maggie Cheung Ho Hee (張可頤). This blueprint was later brought over to TVB’s D.I.E. <古靈精探> series starring Roger Kwok (郭晉安).

If you have seen Inbound Troubles <老表，你好嘢！>, imagine Crazy Vacation to be its horror counterpart. A horror-comedy, Crazy Vacation intended to tell the story about a group of tourists who comes upon a pair of unpleasant tour guides that create terrifying havoc during their stay in Hong Kong. Hacken Lee (李克勤) and David Lui (呂方) would have starred as the villainous tour guides. Nancy Sit (薛家燕), Athena Chu (朱茵),Theresa Lee (李綺虹), Michelle Saram (雪兒) and Ekin Cheng (鄭伊健) would also star in humorous guest appearances. The drama was first announced at TVB’s Sales Presentation 2000 event.

Storm of the Walled City <城寨風雲>

Planned to be a dark action thriller, the teaser trailer for Storm of the Walled City was first unveiled at the TVB Sales Presentation 2000 event. The drama was set against the backdrop of the Kowloon Walled City – a densely populated, dangerous, and largely ungoverned residential area – during 1960’s Hong Kong. The Walled City was originally a Chinese military fort, but triads took over the enclave in the 1950’s and made it a place of its own. The urban miniature city was demolished by the Hong Kong government in the early 1990’s.

Storm of the Walled City would have starred Frankie Lam (林文龍) as a relentless but clever youth who has a gambling addiction. He is hunted down to be killed by various triads within the Walled City after he cheated in a game against a big boss. At the same time, Gallen Lo (羅嘉良), an unlicensed dentist, is forced at gunpoint to remove a bullet from a dying triad member. The series would have also starred Yvonne Yung (翁虹) and Florence Kwok.

With adrenaline-pumping underground characters and a thrilling storyline to boot, fans of Hong Kong action cinema and gangster films were disappointed that Storm of the Walled City was canceled. Possible reasons may be because of its high production costs: rebuilding the Walled City set would have been expensive and time consuming.

The teaser trailer of Cheung Po Tsai was first released at the TVB Sales Presentation 2000 event, in which Louis Koo (古天樂) starred as Cheung Po Tsai, Jessica Hsuan (宣萱) as Cheng I Sao, Joe Ma (馬德鐘) and Derek Kok (郭政鴻) as Cheung’s accomplices, and Marco Ngai (魏駿傑) as an admiral. Cheung Po Tsai was a very famous and powerful Cantonese pirate who lived during the 19th century and was believed to have had over 50,000 followers and 600 ships to his command. His legendary character has made numerous guest appearances (as a villain!) in popular media, such as in 1983’s Project A<A計劃> and 1995’s Once Upon a Time in China 5 <黃飛鴻之五龍城殲霸>. He was also the inspiration behind Chow Yun Fat’s (周潤發) Sao Feng in the Disney film Pirates of the Caribbean: At World’s End and Scratchmen Apoo in the popular manga, One Piece.

Originally meant to be a co-production with mainland China’s CCTV, TVB’s Cheung Po Tsai was proposed to be a grand-production drama that documented the details of Cheung’s life. Cheung had an interesting life indeed – when he was 15 years old, he was kidnapped by pirate captain Cheng I and his wife Cheng I Sao and was forced to serve in piracy. Cheung was extremely handsome and the homosexual Cheng I wanted to take him in as his lover. His wife Cheng I Sao was also very fond of Cheung, and thus, Cheung quickly rose to power amongst other pirates. When Cheng I died, it was Cheung who replaced him as captain. He also took Cheng I Sao as his wife.

Why didn’t Cheung Po Tsai work out in the end? Firstly, expensive production costs. Even with the support of big names like CCTV, marine wars are never easy to film. A lot of computer graphics would have to be included, and television computer graphics back in the day were incompetent and embarrassing to look at. Secondly, Louis wanted out. He was exhausted after filming At the Threshold of an Era <創世紀> and didn’t want to film a new drama so soon. Louis’ so-called successor at the time, Raymond Lam (林峯), was said to be considered for the role as Cheung after Louis left.

First introduced at the TVB Sales Presentation 2001 program, The Dangerous was a story about three highly-trained and skilled condemned prisoners who were hand-picked by the Hong Kong Police Force to complete and solve near-impossible tasks and cases. The action-packed teaser trailer also featured Louis Koo, Bowie Lam (林保怡), and Moses Chan (陳豪) as the three professionally trained criminals. The Dangerous teaser was the most popular trailer at the annual event; however, due to difficult negotiations with sponsors, the action-packed crime thriller never made it into official production.

The police procedural drama revolves around a fictional team of cops serving for Hong Kong’s Narcotics Bureau. Introduced at the TVB’s Sales Presentation 2002 event, Ekin Cheng starred in the racy teaser trailer as the team’s inspector. Raymond Lam and Michael Tse (謝天華) made appearances as drug victims at a nightclub.

The trailer was more or less an introduction of what was expected to come in the drama, if it was to be produced – many drunken teenagers, many explosions, a lot of drugged driving, and a lot of death. TVB kept with this idea and later incorporated it into one of their future dramas, 2012’s Highs and Lows <雷霆掃毒>, which also starred Raymond.

The haunting Book of Three Lives was presented at TVB’s Sales Presentation 2002 program and would have starred Alex Fong, Jessica Hsuan, and Kwong Wa (江華) in a tragic cross-century story about revenge and karma. Alex, who has been having recurring nightmares of his past lives, consults an oracle, portrayed by Helena Law (羅蘭), on how to end his violent dreams. Helena hands him the ancient Book of Three Lives, a scroll about ancient Chinese reincarnation, and warns him that what is destined to come for Alex will be determined by the sins he committed in his past life.

In his previous life, Alex was the rich heir of a large bank empire during 1930’s Republic China. He had an illicit affair with his late friend’s wife, portrayed by Jessica, and almost sacrificed his family fortune to please her. However, Alex was abusive and controlling, prompting Jessica’s final decision to leave him. In their quarrel, Alex accidentally stabbed Jessica.

Finally unable to escape his fate and karma, present-day Alex is fatally stabbed by his wife Jessica, who is having an affair with Kwong Wa, the friend Alex killed in his previous life. 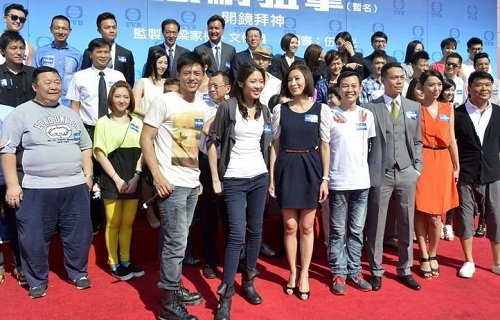