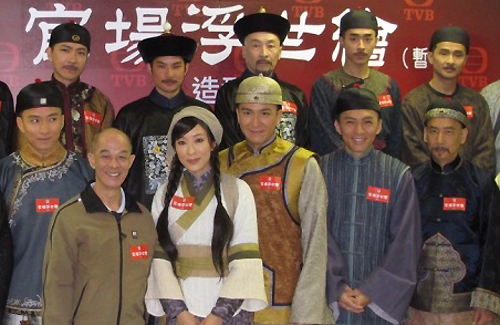 This will be Kenneth and Tavia’s third time portraying lovers. Kenneth does not believe that their pairing is outdated, and said, “I’ve never seen Tavia in pigtails before! That’s something new.”

Tavia recently lost her voice due to an inflammed throat. Asked if it was her boyfriend Him Law (羅仲謙), who has been slightly ill with a cough, that made her sick, Tavia said, “I don’t know about that. If it’s possible I want to make him sick.” Tavia said she welcomes Him to visit her on set. “He should come visit the sick,” she said with a laugh.

The Paintings of Bureaucracy also marks the first official comeback drama for Joel Chan (陳山聰), who had taken a two-year hiatus from the entertainment industry. Joel will be portraying Kenneth’s protective oldest brother, who ultimately walks down a dark path while trying to save the family’s business.

Portraying a villain character once again for TVB, Joel said he is very thankful to TVB for giving him more opportunities. He said it was TVB management executive Virginia Lok (樂易玲) who helped him with his comeback. “We had a meal together, and she felt like I was prepared for it. I also felt ready, and Tim Gor was also preparing for a new drama. I will try my best in the role.”

Joel brushed off the rumors claiming that he had money problems and revealed that he had just signed a three-year contract with TVB with a decent raise. “I will work hard to repay my debt to TVB. If I really did owe anybody money, I think my face would be plastered all over the streets by now!”

In regards to his publicized breakup with socialite Florinda Ho (何超雲) two years ago – a breakup that pushed Joel to a career hiatus – Joel said, “The past is the past. I have reflected.” Asked if they still kept in contact, Joel said, “Let’s not talk about this. I don’t want my comments to affect her. I am now starting a new path.”

112 comments to Kenneth Ma, Tavia Yeung, at “The Paintings of Bureaucracy” Costume Fitting