On stage, the cast shared their experiences of filming the movie, which was shot last year. Chow Yun-fat also encouraged the students, saying, “I’m very thankful that I have earned more than I have lost after coming to this industry.” He also said, “I feel very lucky as an actor. I get to die so many times in film! I also get to have the opportunity to bring the director’s message into moving images. Acting is fake, but the emotions are real.” 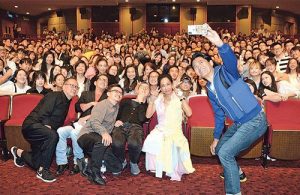 He recalled a scene in the film where he had to strangle his costar Aaron Kwok (郭晉安), a scene that got even the legendary actor to feel extremely terrified. “In the film, I may look like a killer, but in reality, I’m pretty amiable. When I strangled Aaron Kwok’s neck, my heart rate really went all the way up to 180.”

The film is set in the backdrop of an organization that is skilled in making counterfeit banknotes. Chow Yun-fat plays “Painter”, the mastermind behind the organization. The actor shared that he dedicated a few months of his time to learn how to properly shoot a gun, saying, “We need to respect them and be careful with them. Before firing, I’ll make sure everything is in place. Don’t want any mistakes to happen.”

According to director Felix Chong, he drew a lot of inspiration of Chow Yun-fat’s earlier works, including A Better Tomorrow <英雄本色> and God of Gamblers <賭神>, to write the character of “Painter.” He jokingly said, “I couldn’t help it. I’ve been watching Fat Gor’s films since I was only a few years old. I’m sure a good portion of the Hong Kong people are his fans. He took over the TV and film industries for many years.”

A student asked the stage, “How do you become you’re life’s own hero? Just like someone as rich and cool as Fat Gor.” Chow Yun-fat responded with a laugh, “I encourage you all to audition for TVB’s acting class!” Another student asked, “How about the best way to earn fast money?” Chow Yun-fat jokingly said, “Then I suggest becoming a nightshift security guard! You sleep a few hours and earn a few thousand bucks. Don’t wash dishes. It’s too much work. You are strong and handsome, so a security guard is your best bet. After you earn money you have dreams, and after having dreams, you will have the means to go on stage to be your own hero.”