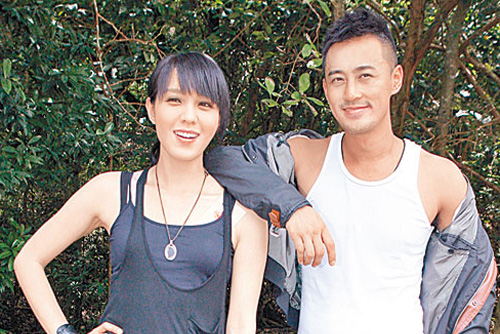 Raymond Lam (林峯) and Ella Koon (官恩娜) were nearly complete in filming TVB drama, Highs and Lows <雷霆掃毒>, previously known as Fight Crime. Raymond and Ella filmed a gunfire scene in the hot temperatures. The pair stripped down to skimpy tank tops on the set, in which Raymond revealed his toned body!

Upon discovering that Ben Wong’s (黃智賢) character had mixed drugs in a bottle of distilled water, Raymond and Ella fired their guns at his water bottle, hoping to make him appear. To produce realistic results, real guns were used in filming the scene. Ella gripped tightly onto her gun, causing her hand to bleed. She joked that Raymond did not take care of her, which led to her bleeding.

Raymond appeared tanned and retained facial hair for his explosive cop role in Highs and Lows. Tired of filming gentleman roles over the last three years, he welcomed the change in playing a straightforward character. “My character is in charge of the Intelligence Unit within the police force, but he is nosy and often participates in criminal arrests!”

The hot weather did not deter Raymond and Ella’s good mood while filming in Sai Kung yesterday. Ella indicated that she learned to always keep water by her side to quench her thirst and avoid getting a heat stroke. Raymond repeatedly wiped sweat off his forehead during filming breaks, but was able to sprint quickly for the action scenes.

Raymond Afraid of Ripping His Shirt!

With his concert at The Venetian hotel in Macau coming up on May 12th, Raymond has been busily training to appear in his best form. After doing push-ups and sit-ups relentlessly, fine results can be clearly seen.

Raymond joked, “I’m afraid to train my chest muscles too hard. My shirts have grown very tight. If I become too muscular, I’m afraid my shirts would burst!”

Jayne: Raymond seems to have lost weight, but with obviously more defined arms. I guess his back pain must be under control, since has been filming running scenes and likely to have many dance sequences at his Macau concert.