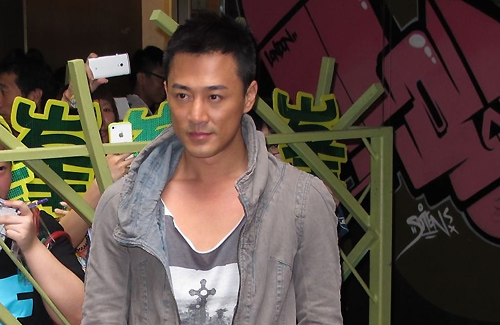 Ella Koon and Ron Ng (吳卓羲) met on the set of Revolving Doors of Vengeance <酒店風雲> in 2004, and allegedly dated soon afterwards. However, it was reported that the couple quickly ended on bad terms. When Ron’s multiple infidelity scandals were exposed by the media in late July, Ella posted an ambiguous message on her Weibo, seemingly pointing fingers at Ron that he had also cheated on her when they were dating. She deleted the Weibo post a minute later.

Ron and the cast of Triumph in the Skies 2 <衝上雲宵II> has recently returned to Hong Kong from a two-week shoot in Sanya, Hainan. In the beaches of Sanya, Ron was seen acting very intimately with married costar, Toby Leung (梁靖琪) behind the scenes, sparking infidelity rumors again.

Ella sighed, “I don’t know anything about it. When I am in parties I would also get pretty crazy, but never that high. Don’t drink so much! It’s bad for your health!”

Raymond Lam stepped up to defend his good friend, “Ron, Toby, and I have known each other for many years. She would call us ‘big brothers.’ I think it’s just a misunderstanding. When Ron sees me, he will hug me too! The media should please show some mercy.”