Starring in numerous Mainland Chinese productions in recent years, Raymond Lam‘s (林峯) latest drama is Star of Ocean (星辰大海) opposite Liu Tao (劉濤). While some fans are excited about the pairing, praising the duo for both their good looks and great acting skills, some are critical of their physical comparability as they find Liu Tao to look more mature than Raymond.

Primarily a female-focused inspiration drama, Star of Ocean is set in the early 1990s and follows a smart, orphaned woman (Liu Tao) who moves to Guangzhou for work. Her wit, cleverness, and kindness eventually molds her into a successful foreign trade merchandiser and business manager as she rises up the corporate ranks. 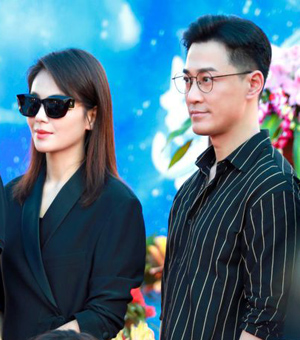 While the role seems very fitting for Liu Tao to play due to her strong screen presence, some fans are rejecting her onscreen pairing with Raymond. One fan reacted, “Liu Tao is old enough to be Raymond’s mom, right? That’s scary.” Perhaps due to Liu Tao’s frequency of portraying mature, strong-willed characters, some may falsely believe she is much older than she actually is. In reality, Liu Tao is only older than Raymond by one year!

Angered by the criticism, Liu Tao’s fans were quick to respond. They pointedly emphasized that Liu Tao’s earning power and popularity far exceeds Raymond, whose career in China has failed to reach the same level of success as his career in Hong Kong.

Although there is much debate about the leading cast members, the drama is nonetheless receiving a lot of attention and the pairing of Liu Tao and Raymond may ignite some surprising sparks. Currently filming in Zhongshan, Star of Ocean has an expected 2021 release date.