Starring Liu Tao (劉濤) and Raymond Lam (林峯), reactions were mixed when Star of Ocean <星辰大海> first released its trailer. However, it then premiered to surprisingly good ratings, with Raymond’s scene-stealing outburst scenes and exaggerated facial expressions in the first few episodes being compared to Alex Man (萬梓良) and Steve Ma (馬景濤) amid fervant discussions! 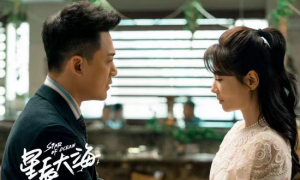 On a recent interview, Raymond responded to the controversy over the forceful acting style he adopted for his character Fang Hengzhi, which led viewers to label him “king of yelling”. Defending his delivery, the actor attributed his many emotional meltdowns on the drama to the “multiple emotional and family pressures”, on top of various challenges he had faced.

A rich 2G, Fang Hengzhi is born an illegitimate son to a rich Southeast Asian businessman, who refuses to formally acknowledge him. While he faces discrimination from his stepbrother, Fang does not hanker after his father’s riches, but is nevertheless forced to enter the family business and politicking by his power-hungry mother, keen to fight the first wife for her share of the wealth. Since Fang is destined to be embroiled in struggles in every aspect of his life, Raymond laughed and added that among all the dramas he has done so far, Star of Ocean had the most number of crying scenes in various fashions!

Raymond remains ambitious in his music aspirations, as he looks to ways to release bigger hits.

While they were dating, Raymond was afraid Carina would leave him.