Focused on the mainland Chinese market in recent years, Raymond Lam (林峯) has been busy on both drama and variety fronts. With four dramatic productions on hand, the anticipated Star of Ocean <星辰大海> was set for an October 30 release, and a highlights trailer uploaded by Raymond himself showed the star portraying an infatuated businessman in aggressive pursuit of the drama’s female lead played by Tamia Liu Tao (劉濤).

Quoting his character, Raymond captioned his post with a line from the drama “You can’t leave me, Jian Ai, I’ll always bother you!” The female-centered story tells of how Raymond’s financial talent character meets and starts an office romance with Jian Ai, who rose through the corporate ranks by hard work and perseverance, despite her humble background. In one of the scenes, a formally-attired Raymond confronts Jian Ai and screams at her in an agitated manner, with his veins bulging prominently, while dousing her with water from a hose in another confrontation, presumably when she rejects his advances. 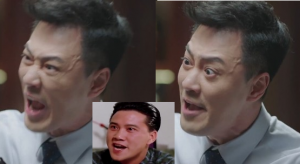 While some viewers praised Raymond for leveling up his acting chops and drew a parallel between his intense delivery and veteran star Alex Man‘s (萬梓良) classic emotional outbursts onscreen; while others felt a little embarrassed and took jibes at the two leads playing out the hackneyed romantic scene, and commented, “Return me my Bao Seed!”, referring to the actor’s memorable role in TVB’s Line Walker <使徒行者> series.
Source: On.CC