Residents Tell Kenneth Ma to Be Quiet While Filming “The Exorcist’s Meter 2.0” 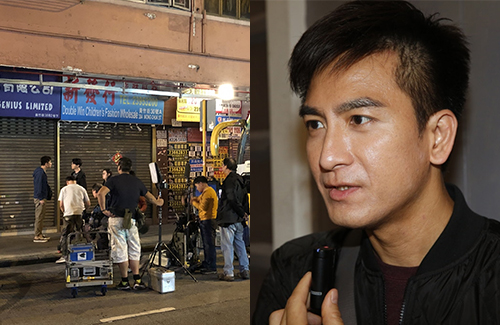 Not everyone is excited about clairvoyant taxi drivers.

The Exorcist’s Meter 2.0 <降魔的2.0>, sequel to the 2018 hit TVB drama, continues with the events that happened in the original series, which stars Kenneth Ma (馬國明) as a night-shift taxi driver who is also a part-time demon slayer. Most of the original cast is returning, including Mandy Wong (黃智雯) and Hubert Wu (胡鴻鈞).

A few days ago, The Exorcist’s Meter (TEM) took its filming location to a residential area in Sham Shui Po for an outdoor scene that involved Kenneth Ma yelling at Hubert Wu. After he screamed a few times, someone from the residential unit loudly yelled, “Be quiet!”

“We didn’t dare to yell too loud after that,” said Kenneth. “The script only mentioned yelling once or twice anyways. I feel embarrassed that I had disturbed others.”

Due to its supernatural genre, the TEM cast often have to film in the middle of the night. Asking if the cast had come across any incident where there were altercations with residents, he said, “It’s common to hear people tell us to be quieter, and we do respect their wishes. After all, we do not want to affect their rest.”

Kenneth shared that there is a way to control one’s volume while screaming. “Don’t go all the way. Yell out only after you show the expression.”

It is commonly believed that late-night filming is more productive than during the day due as the streets are less busy. Kenneth said, “It really depends on where and what you’re doing. If you’re trying to film at a busy market, you will be the one to ask the citizens to be lower their voices for the ease of recording. If you’re filming in Lan Kwai Fong, there would be tons of people, regardless of how late it is. They’d try to take pictures with you, and some would even get really drunk.”

1 comment to Residents Tell Kenneth Ma to Be Quiet While Filming “The Exorcist’s Meter 2.0”