Review: “Highs and Lows” (By Miriamfanz)

By miriamfanz on November 6, 2012 in NEWS, REVIEWS 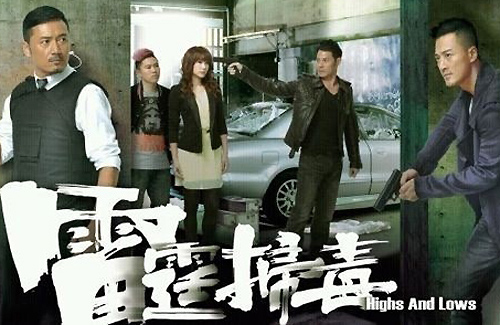 Hong Kong is invaded with drugs and it’s up to the Narcotics Bureau to fight against it. Except there are corrupt officers that undermine the mission. But no fear, “Iron Man” Raymond Lam comes and saves the day! Okay, it didn’t really happen that way. Raymond would save the day if he weren’t so consumed with Kate Tsui, an informant turned Drug Queen. Ella Koon does a great job just standing there. Michael Miu and crew love to eat hot pot. Ben Wong is *gasp* the villain. A lot of people die, but if there’s one thing this series taught us, it’s that explosions can never kill.

This drama does not disappoint. There were plot holes and some parts were draggy, but you would want to watch the next episode right away, and that, to me, always is an indication of a good drama. The series would be boring if it were just about cops catching one drug lord after another. The intriguing aspect comes from the existence of corrupt officers working for a mysterious “Agent”. Just when you think that ends, a whole new twist comes with the emergence of a second “Agent” that brings the series to its climax. The series is not about good cop, bad cop as there is a very grey area due to their motives. The second interesting aspect involves Kate’s life. Her character is pitiful and certainly gained the sympathy of the audience. Her whole life is ruined by drugs, yet she still becomes entangled with the traids and drugs, eventually becoming the Drug Queen.

The talk of town is will Raymond win the TV King title based on his role? His character was inconsistent. He begins as a casual guy who never seems to be serious but who is actually a very diligent cop. Then he goes from being “Happy Sir” whose favorite line was “Nice…” to “Very Worried and Very Serious Sir” whose eyes grow exponentially larger when he yells. He was witty and charming at the beginning, but then becomes somewhat annoying for being so irrational over his love for Kate. If there ever was a need to prove that love can make one blind, Happy Sir is the ultimate example. For someone who is so adamant about upholding the law, he lets Kate walk off on several occasions when he should have arrested her. He really has no right to talk to Michael about being an honorable cop. I do believe it is Raymond’s interpretation of the character, rather than the script, that makes Happy Sir so inconsistent. For example, in those scenes with Michael where he is hinting that he suspects Michael is the “black cop”, he could have been had a more relaxed attitude. After all, it was supposed to be just a casual conversation with his best friend. My conclusion is his acting in this series is not the best, but he probably will get it anyways. Next question is will Kate win the TV Queen title based on her role? Kate does a great job of bringing Pat to life. A silent tear would roll down her cheek every time she thinks of her past. It shows how Pat is a rather helpless person to her fate, but has to stay tough in order to survive. The much talked about rape scene amounted to nothing, but her crying scene where she recounted the rape was well done. She is tender in the scenes with her brother. Kate is at least a very worthy contender for TV Queen.

Michael is very chok and his mustache makes him look even more manly (way better than Raymond’s). Unlike Raymond, he’s serious when he needs to be and more casual for other scenes.

Ella’s character is very kind-hearted but rather naïve. She unquestionably believes what other people say. There’s nothing special about her acting because all her character really does is stand there and talk.

Elaine Ng’s Madam Yu has me questioning how she can hold such a high position in the police force. How can she be so stupid to photocopy evidence for her boyfriend? She is not convincing as a tough, career-minded woman because she looks very weak. A lot of times, it’s as if she’s on the verge of crying. Now if anyone deserves an award, it should be Ben Wong. He is excellent as the pain-in-the-backside superior, shows a softer side in the scenes with Ella and when he became the ultimate villain, you could see the pure evil in his eyes. However, the scripting for his character was illogical. It’s a little hard to believe that a former police officer would turn so evil so quickly. Yes, he wanted to get revenge, but to go to the extent that he did? Also, the way he was forced out of the police was stretching it. There was only circumstantial evidence pointing towards him for not saving Kate and even if proven, it amounts to a mere error in judgement. It would be a different story if they found out about the arson and tampering with the memory card, but they did not, so I don’t see why the big fuss about it.

The ending was good, neither too rushed nor too draggy. It was exciting almost right to the very end. There are a lot of people dying, but unlike other dramas, the deaths are appropriate to the story. Many people might have wanted Kate to live and end up with Raymond, but it is a rather fitting conclusion to her tragic character. She will probably be worse off living and being haunted by the fact that her loved ones are all dead, plus she would have to raise the child that she has with the man who caused all those deaths.

I’m glad Raymond and Ella didn’t end up together because throughout the whole series, he never liked her and it would not make sense if he suddenly realized that he loved her.

The only problem I had was that Jazz Lam and Law Lok Lam would confess to their crime after Michael had died to protect them. It makes Michael’s death almost meaningless. The only reason they would confess is because some viewers would throw a fit if justice is not served for the bad guys.

140 comments to Review: “Highs and Lows” (By Miriamfanz)