Review: “The Hippocratic Crush” (By VCN) 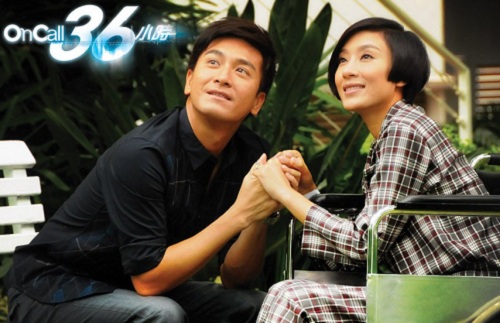 TVB’s The Hippocratic Crush is a Hong Kong television drama about medical interns and residents training to become specialized physicians and surgeons. It follows the story of Cheung Yat Kin (Kenneth Ma), the brilliant neurosurgical chief, as he learns to cope with love, loss and career obstacles during his final year of residency. Beside him is Fan Chi Yu (Tavia Yeung), Yat Kin’s biggest critic and his mentor’s daughter, who later falls in love with him.

Alongside Yat Kin and Chi Yu’s struggles are the coming of age stories of two medical interns, the playful Yeung Pui Chung (Him Law), who cannot balance work and fun, and the seemingly mature Hung Mei Suet (Mandy Wong), who is intelligent and arrogant in speech and action. Other medical interns face the typical challenges of hospital work as they decide whether or not medicine is the right profession for them.

The title, The Hippocratic Crush sounds great compared to the previous titles of other TVB dramas. However, what does it really mean? Hippocrates was a Greek physician, who was known as the father of medicine. Hippocrates is often mistakenly represented as the practice of medicine itself. A “crush” is slang for the state of being in love. So, I suppose the producers are trying to tell us that these characters are in love with the medical practice. Hence, the pursuit of medicine as a profession. Personally, I prefer the literal English translation of the Chinese title, On Call 36 Hours, because it highlights the physicians’ dedication to their patients. There are a plethora of better English titles, but I will not elaborate on naming schemes in this review.

Overall, the content is good and offers us a rare glimpse of the medical profession with a few exaggerations. Despite the accolades of many viewers and the higher than usual viewership ratings, the series is still riddled with miscellaneous inconsistencies. Even with the expert advice of a physician on the filming set, TVB manages to fall short of producing the perfect medical drama. I can point out each and every single inconsistency ad nauseam but will refrain from doing so. Instead, I will only mention a couple of the more critical discrepancies and inaccuracies.

Part of being a great physician centers around the ability to observe. Physicians are constantly assessing patients through subjective signs and symptoms in addition to objective measurements, such as BP, Temp, labs, etc. But the renowned and highly respected neurosurgeon, Fan Chi Ngok (Wilson Tsui), is not cognizant of the illnesses plaguing the people around him. He misses the depressive symptoms of his wife, the signs of dementia in his longtime housekeeper, the unusual disinhibitions of his good friend, and the nearly fatal ailment of his beloved daughter. Given these events, I am naturally compelled to question Dr. Fan’s abilities as a talented surgeon. Is Dr. Fan a truly brilliant physician or did TVB simply botch another character’s development?

Sze Yuk Lan’s (Mary Hon) excuse for abandoning Fan Chi Yu as a child was outright pathetic. In this series, all the other depressive patients recovered and quickly resumed normal life. However, Yuk Lan was the token character to not fully recover from depression. Worse yet, she intentionally estranged her unborn child from her biological father, her ex-husband. Is that really a symptom of depression? It seems more like malice or spite to me. (Or easy closure for TVB scriptwriters.) So what was Yuk Lan’s true motivation for divorcing her first husband, Chi Ngok, and abandoning their eldest daughter?

Similarly, why were the interns constantly requesting permission to practice all sorts of medical techniques on the patients? Worse yet, why were they asking the patients themselves for the permission? As I watched their all too earnest pleas for practice rights, I laughed irresistibly at their ridiculous demands. Incidentally, the humor also reminded me of a David Letterman quip and I couldn’t help but wonder when these interns would also ask permission to perform autopsies on their patients. In the real world, there is no asking. As Yoda says, there is only “do or not do. There is no try.” Can you imagine the distress of patients if they were told that they were being practiced on? This along with the constant reprimands of seniors and the didactic grilling of lower level trainees in front of patients dampen their sense of professionalism as physicians. Such criticism should be reserved for the office or the nurse’s station at the very least to help control inpatient stress and omeprazole abuse. No pun intended, folks.

I’m not an expert on tumor-related disorders, but the medical information in The Hippocratic Crush seems accurate. Unless things are different in Hong Kong, the BLS guidelines and the rank implications according to white coat style and length are not consistent with US standards. However, I will not delve into the details on this matter.

Despite my criticism, I genuinely enjoyed The Hippocratic Crush. In fact, I liked many of the more poignant moments in this series. In episode four of the drama, I really appreciated the matron nurse’s professionalism when she likened the role of a healthcare practitioner to that of a stage actor: “We are different people once we don our uniforms and the white coat. We tolerate the unpleasantries of our patients and their families because our mission is to help people. Our tolerance is a sign of our professionalism.” Equally nice touches were the realistic and ongoing customer service challenges existent in the healthcare profession today. Even the minor discussion on dry skin and hang-nails managed to hit home effectively.

For the most part, the plot driven storyline ran smoothly. Adopting the age-old TVB formula for high viewership ratings, the iconic larger-than-life hero nobly endures all his trials and tribulations and wins the female lead in the end. The drama is neither riveting nor intensely melodramatic but adequate. With a fairly well-written script, the TVB story arcs finally began to make sense and character development was occasionally rushed but for the most part reasonable.

For a change, the comic relief was actually funny and entertaining, especially the farcical scenes involving orthopedic surgeon Lau Ping Chan (Benjamin Yuen) and nurse Lui Siu Yat (Derek Kwok). Equally funny was Yeung Chung’s comical courtship of Chi Yu. Even Chi Yu’s proposal to Yat Kin was laughable despite being cliched. In this series, the character names were traditionally Chinese as opposed to rare English ones, thereby making the characters more realistic and much less pretentious.

Every actor and actress in The Hippocratic Crush rightfully earned their pay for their exceptionally well done performances. To keep the review short, I will only focus on the leading roles. If I happened to skip your favorite character, please don’t assail me with complaints. Other reviewers have criticized Kenneth Ma’s performance as Cheung Yat Kin. He has been described as being inadequate as the stern and unrelenting neurosurgeon, but the character, Cheung Yat Kin, is not innately mean or aggressive, so there is no need for him to be ferocious. Rather, he is a sullenly pleasant individual burdened with the guilt of a reckless past and the financial support of his family. His overbearing sense of responsibility and magnanimous tendencies are a result of his wish to follow in the footsteps of his mentor and the desire to save lives. Slightly gawkish and timidly reticent except when discussing medicine, Kenneth Ma’s Cheung Yat Kin displayed all the characteristics befitting his role. His facial expressions were essentially credible. Sparing spoilers, even the deadpan expression of nothingness immediately prior to his mental crisis was accurately appropriate. He was strong when he needed to be and emotional when he had the opportunity and privacy to be so. In my opinion, Kenneth Ma was far from being amiss in his portrayal of Cheung Yat Kin. In fact, he nearly perfected the character for us. Tavia Yeung played very well opposite Kenneth Ma. As Fan Chi Yu, the daughter of the famous neurosurgeon, Fan Chi Ngok, Tavia’s character was harshly critical of others and quick to judge as well.

Contrary to the criticism of other reviewers, I thought Tavia’s acting in The Hippocratic Crush showed marked improvement. This change can be tracked through the reduced need to replace her voice in episodes near the end of the series. In The Other Truth and Yes Sir, Sorry Sir, many of her scenes relied on a dubbed voice that was not hers to deliver her dialogue. Tavia’s acting was most exceptional in her scenes with Yat Kin where she behaved in a “yes, yes, no, no” demeanor. Him Law’s Yeung Pui Chung is used mostly as a vehicle for plot development and rising conflict. By far, his role is the most dynamic and colorful in this drama series. Juvenile at the start of the series, Yeung Pui Chung matures into a caring responsible physician after several life-changing events. Him Law played this humorous character with fun-loving grace.

Of the leads, Mandy Wong’s role as the insolent Hung Mei Suet is the weakest. Absurd and manipulative, Mei Suet would be a difficult character for a young actress to portray, but Mandy Wong managed to pull it off quite satisfactorily. I felt that her performance could have been better, but her character garnered a substantial amount of disfavor from my fellow audience member, my mother. After all, the more despicable the character, the more successful, right?

Conclusion and Hopes for the Sequel

In general, The Hippocratic Crush was a good one and worth investing 18.75 hours of my life into watching it. The drama was a refreshing change from last year’s many TVB legal dramas. Albeit an enjoyable drama as a whole and an instant hit with viewers, I can only give The Hippocratic Crush four and a half out of five stars because there is always room for improvement.

Riding on The Hippocratic Crush’s ratings success, TVB has promised its viewers a sequel to the drama. Since sequels always tend to be weaker than its original, I hope TVB continues the storyline seamlessly where they left off in episode 25. Similarly, they should avoid eliminating old characters for newer ones to further plot devices; many of the existing characters still have growing capacity.

For example, the relatively minor role of the philandering Benjamin Yuen as Lau Ping Chan, the best friend of Yat Kin, is that of the stereotypical orthopod. Suave and charismatic, Benjamin’s character can be fleshed out beyond the hasty happily-ever-after relationship into which he is plunged. Even thoroughly developed characters such as Yat Kin can have new stories without turning to cheap overused plot devices like replacing his wife. To the producers of TVB, please don’t ruin a decent story with a bad sequel.

77 comments to Review: “The Hippocratic Crush” (By VCN)