Review: The Life and Times of a Sentinel (By VCN) 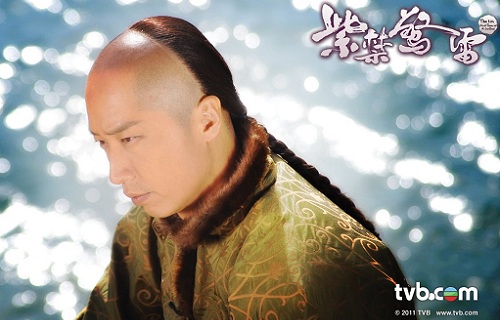 The Life and Times of a Sentinel <紫禁驚雷>
Hong Kong TVB Drama, 2011

The Life and Times of a Sentinel is a 26-episode Hong Kong TV drama based on historical events taking place in the Forbidden City of China during the late 17th century. In the early years of the Qing Dynasty, ethnic strife plagued the kingdom. Manchu and Han were ordered to live apart so that each race could “live in peace.” To win Han acquiescence, Emperor Kangxi resurrected the 1647 decree that “Manchu and Han are one family.” Using historical events as its background, The Life and Times of a Sentinel examines the possibility of peaceful coexistence between Manchu and Han. Alongside this theme rises the fictional question: Who is the rightful heir to Emperor Shunzhi’s (Sunny Chan) throne? Does it belong to Emperor Kangxi (Power Chan), the incumbent ruler for the last 25 years, or his elder brother, Fuquan, Prince Yu (Kenneth Ma)? Facing the threat of civil war, royal family members and imperial court officials are summoned to unravel the mystery of the Emperor Shunzhi’s sudden death and his designated heir to the throne. The story unfolds with a flashback to the final days of Shunzhi’s reign while treachery, misguidance, revenge, incest and moral corruption pepper the storyline. Ostensibly, the story is about a power struggle between the Grand Empress Dowager (Ching Hor Wai) and her grandson, Fuquan, but it also follows the tragic life of a sentinel, Nip Dor Po (Steven Ma), as he discovers love, brotherhood and ultimately the truth about his origin.

The Chinese title of this drama series is very dramatic. Literally translated, it means “Frightening Thunder of the Purple Forbidden [City],” but the English title is The Life and Times of a Sentinel. Given the content, this title is accurate in that it does follow Nip Dor Po as he transcends his simple origins as a citizen of Han descent to a high ranking imperial sentinel and much, much more in the conclusion. But, what part of the title represents the power struggle? Again, TVB manages to deliver us another weakly descriptive and mediocre English title.

By harnessing the intrigue from one of the greatest mysteries of the Qing Dynasty, TVB has discovered a treasure chest of interesting plotlines. Lacking true historical relevance, TVB scriptwriters concocted this fictional tale of a royal power struggle between brothers. The convoluted relationships and powerful emotions in this drama series had the potential to enthrall and captivate viewers. To my dismay, TVB scriptwriters lacked the will power to produce a drama that is a true tour de force and a manifesto of their creative abilities.

TVB will continue to be TVB with its signature style of unabashedly recycling old thematic material and plot devices from previous dramas. The usual broken families and lost children themes become crucially significant in this drama. The abortion by herbal scent scheme also replays itself here. Even well-written dialogue from previous dramas finds a home in this series. Just when the series begin to feel like a junkyard of déjà-vu’s, the scriptwriters throw the viewers a curve ball: the surprise ending in the finale.

The unforeseen ending is contextually insubstantial and a complete structural catastrophe. Where in the other 25 episodes did the writer develop Nip Dor Po’s relationship to Emperor Shunzhi ? A mere hint appears when Kei Man Cheong (Lai Lok Yi) abandons his search for his infant son to settle other affairs. This scene leaves the audience slightly mystified because his irrationality and lack of affection for the infant is quite dubious. The only other inference to Dor Po’s true identity is when his foster father returns a gold locket to him minutes prior to the parent’s dual suicide. This hint is once again so subtle that few viewers would pay careful enough attention to notice it. Then, Kei Man Cheong’s (Felix Lok) excessive joy in being reunited with Dor Po completely debunks any remote suspicion that the audience may have that Dor Po is not his biological offspring. There is little to no motive binding the rising action to the ultimate conclusion.

While the ending failed, the suspenseful events leading to the conclusion was adequate. For 19 hours, the audience was beguiled into believing that Dor Po would be the righteous arbiter, who would settle right for wrong with his superior martial skills. But, he comes out being more and somehow worse for it, jumping into the foray for sovereign power in what was essentially just a royal family feud. Honestly, I felt deceived and cheated of a bigger, more revelatory ending that would offer better insight and closure. In a word, the finale is a disappointment. In summary, very little occurs in the 19.5 hours of action. Nothing happens that did not already exist in the beginning: Kangxi is still in power; Fuquan is still withheld from politics; Dor Po is still a law-abiding citizen of the Qing Empire; Kwai Lun (Natalie Tong) still has her husband’s undivided attention; Man Kwan (Elaine Yiu) still is not in love with her husband, the Emperor; and Chi Ying (Selena Li) is still as lost and confused as ever about life in general. Essentially, the characters are back exactly where they had started with a few odd twists. Albeit disappointing, it is to TVB’s credit that nothing did occur. In historical drama, nothing can really happen without altering historical facts and timeline. So, I do applaud the producers for their efforts in trying to preserve history.

Lastly, why is the actual resolution so long? Why is the ending so drawn out and strongly reminiscent of the conclusion to Lord of the Rings: Return of the King? During the last few years, TVB has developed a penchant for long endings–long melancholic ones for that matter. I suppose it is to validate the less than obvious notion that Fuquan is not an evil villain, but in fact a tragic figure of misguidance. It would seem that TVB scriptwriters feel that characters are somehow exonerated from their crimes if their lives are spared and if their minds retreat into a world of insanity. What an utterly depressive ending, if it was not for the faint symbol of hope in the last scene that Manchu and Han can coexist peacefully through the marriage of Fung Sheung Hei (Katy Kung), a woman of Han descent, and Yan Chak (Fred Cheng), a Manchu.

Minus the old plot devices and the haphazard conclusion, I found most of this series watchable and relatively enjoyable. Call it an acquired taste for Qing Dynasty period dramas if you like, but I have to admit that there were moments in this series which I found genuinely interesting too. Besides the suspense, rare patches of dialogue are actually original. To TVB’s credit, the scriptwriters did create some fresh analogies. In particular, I was amused by Dor Po’s humorous comment from episode 4 on Fuquan’s controlled existence: “Well, you must have either an abusive wife at home, or your mother must be too strict with you. From the looks of it, you must have an abusive wife.” Similarly, Man Kwan’s letter to Fuquan is sentimentally poignant. Though inconsistently done, some of the filmed sequences and flashbacks are also artistically and effectively incorporated into the series.

The acting in this The Life and Times of a Sentinel is surprisingly good for TVB standards. There are notable performances by Kenneth Ma as Fuquan and and Ching Hor Wai as the Grand Empress Dowager. Kenneth Ma delivers the many faces of Fuquan with credibility; his myriad facial expressions reveal the pathos of a tragic figure severely misguided by false promises. Ching Hor Wai’s Grand Empress Dowager is equally successful. Her pretense to righteousness is so convincing that the audience is tempted to sympathize with her, although she commits high treason by deceiving the Emperor(s).

Steven Ma’s performance as Nip Dor Po is also exceptional; however, he would be fine without his overused expression of impatient contempt in episode 26. This facial expression has been excessively incorporated into the typecast roles that Steven Ma portrays so well, ranging from Land of Wealth to Ghost Writer and now, The Life and Times of a Sentinel. Conversely, Power Chan’s Emperor Kangxi is unconvincing, failing to deliver any regal affectation. Throughout most of the performance, he is overly affable and does very little to convey a sense of authority. Specifically, he points too much, leans precariously on too many posts, sits on too many unlikely places, such as balustrades, and crosses his legs all too much to be a credible monarch. Keeping in mind that fecundity is a crucial aspect of ancient civilizations, such as the Qing Dynasty, neither men or warriors of ancient society cross their legs. Hence, Emperors should not cross their legs. Moreover, Power Chan crosses his legs on the imperial throne in episode 7! Artistic license aside, the accuracy and credibility of a historic character depreciate when artists commit such acting foibles. (For examples, refer to historic portraits of eminent figures, especially that of Qing Emperors.) Fortunately for Power, his defining moment arrives in episode 26, where he adequately redeems his performance as the Emperor. Nowhere else in the series does he project himself as a convincing monarch.

Overall, The Life and Times of a Sentinel could have been a more successful production. However, the scriptwriters did it an injustice, recycling too much old material and concluding an interesting story with a resolution that is clearly underdeveloped. As a result, I give this serial drama a rating of 3.5 out of 5 stars.

For the record, The Life and Times of a Sentinel holds no historical legitimacy whatsoever. This was strictly a creative piece of fiction, although genuine names of historical figures are used. According to historical documents, Fuquan, Changning, Duen Min, Bumbutai, Man Kwan, Nap Lan Sing Tak and of course Emperor Kangxi truly existed. Their kinships to each other were authentic, but the events in this series were not substantiated by any historical facts.

21 comments to Review: The Life and Times of a Sentinel (By VCN)