Rather than seeking out potential partners proactively, the actress believes in love at first sight

In the drama My Commissioned Lover <婚姻合伙人>, Roxanne Tong (湯洛雯) has romantic scenes, including a passionate kissing scene with Kenny Wong (黃德斌), which she called the “most intense kiss” in her acting career so far.

No to Resuming Romance with Joey Law

Currently single after splitting up with Joey Law (羅天宇) one and a half years ago, Roxanne filmed a travel program not long ago with him. Despite seeing each other daily during shooting, there were no more romantic sparks between them. What had taken over was a familiar bond of friendship. “We were at ease filming the show together and there were no hard feelings.”

Asked if she has remaining attachments to Joey, she replied, “If I had any, we would not have split up! It was a mature decision on both our parts, and something we have thought long and hard over,” said the 32-year old actress, who added that the two are like old friends now and share a very comfortable relationship. 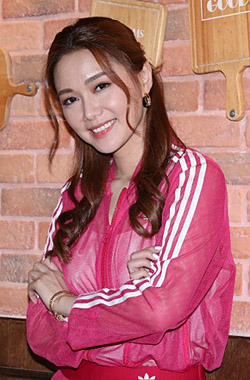 Despite having shot numerous romantic kissing scenes before, Roxanne, who plays a nurse with a straightforward personality in My Commissioned Lover, describes her kiss with Kenny as one of her more intense onscreen kisses.

Although she had pre-conceived notions towards Kenny Wong’s playboy character, a coincidental chance in which she had to care for an injured Kenny turned them into a bickering duo and later drew them closer, with Roxanne’s character falling in love with Kenny secretly.

Roxanne said, “I felt a little nervous during kissing, as Kenny gives the impression of being a big brother who’s very composed. This was shot two years ago. I was quite the newbie then, so many have asked if I felt pressure acting with him. We had a lot to chat about, so it was a very happy experience collaborating together for the first time.”

Lacks Rationality When it Comes to Relationships

When asked about about her similarity to her onscreen character, she candidly admits that she is not as level-headed in real life, admitting she is swung by her emotions more than logic. “It’s been like this for all my past relationships. Maybe because I don’t feel very secure, so I need the other party to like me a lot before I can open myself up to love and be affectionate,” shared Roxanne.

While the actress has been pressured by her friends into widening her social circle, Roxanne said dressing up for work is tiring enough. She is reluctant to go out and socialize with the intention of dating. Adding that she has confidence in herself, she summed up, “The more you search, the harder it is to find (someone)! But the right person might just appear without warning. It can be love at first sight.”

Roxanne said, “I won’t [take the initiative]! I might develop good feelings but would still wait for the guy to ask me out.”