The father of TVB actress Roxanne Tong (汤洛雯), veteran actor Michael Tong Chun Chung (湯鎮宗) has retreated from the limelight in recent years; once revealing that he has no other ambitions for his acting career and is enjoying a peaceful life as a semi-retiree.

Earlier, singer Guan Zhe (關喆) uploaded a short video of Michael Tong performing on the streets of Zhuhai, China while casually dressed in a T-shirt and donning a pair of glasses. Although it was already late at night, the performing duo attracted many passers-by to stop for a listen, while Michael looked good in his sixties!

The one-time actor is a graduate of TVB training class, and was one of the earlier actors from Hong Kong to establish his career in mainland China. Although he was two years older than younger brother Kent Tong (湯鎮業), Michael entered showbiz only later, after he often visited Kent on set and grew curious about the industry. As Kent was extremely popular in his heyday, he could not accept all the filming offers received, and thus recommended his brother to the producers instead. Receiving many opportunities as a result, Michael won viewers over with his masculine charms, and later rose to fame with his performances in Gods of Honour <封神榜> and 1990 Chinese drama <外来妹>. 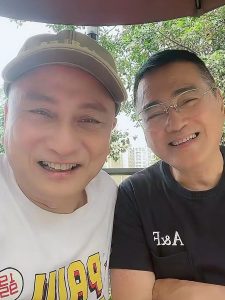 Appearing on live videos with his brother Kent, the 66-year-old looks in good spirits in recent years.