Interviewed recently, Taiwanese actress Ruby Lin (林心如) shared her experience of producing Netflix drama Light the Night <華燈初上>,  and revealed that her biggest headache turned out to be how to arrange for the many food truck delivery requests from friends of the star-studded cast!

“Rose Mama Onscreen and Off” 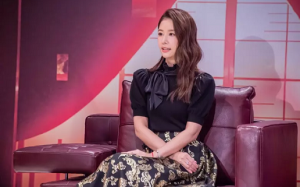 Going on a TVBS program by host Georgina Fang (方念華), she shared that many of the actors had friends who wanted to visit them on-site, so she had to take care of the logistics – prompting the host to tease her, “You’re Rose mama onscreen and off!”

Ruby shared that as a producer, her job is to act as a communication bridge between the investors, directors, scriptwriters and actors. In the pre-production stages, she often burnt the midnight oil trying to figure out how to strike a balance between budget control and creative direction. Taking a dig at herself, she laughingly said, “Compared to the English emails my daughter’s school sends me, I’d rather plan the budget, cos looking at English continuously is more tiring!”

Coinciding with a pandemic wave when filming for the series first started out, Ruby admitted she had her anxieties, “It was really worrying then, as all the actors’ schedules had been confirmed, everyone had reserved their timings and if filming was affected, the losses will be huge,” As the 45-year-old actress was also juggling a Master’s degree simultaneously, she literally had to race against time everyday, yet the thought of quitting did not cross her mind as she “wanted those who did not think well of her to be regretful”.

Director Lien Yi-chi (連奕琦) recalled being impressed by how Ruby nailed over a page of dialogue lines for her character in one particularly challenging scene, which she also delivered with gusto and emotion.

Besides taking care of details, as producer she also had to exercise high EQ, as she would receive calls everyday from friends of her star-studded cast. “Oh, this week’s [schedule] is full! Do you want to change to next week? Or switch to this afternoon instead.”