Invited by charitable organization “Love is King 888” to take part in Domestic Violence Family Outreach Program by the Modern Women’s Foundation, actress and producer Ruby Lin (林心如) made a personal visit to a domestic abuse victim and her children.

Never Bicker in Front of Kids 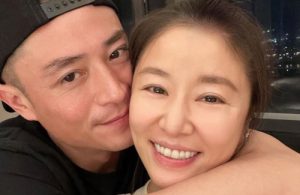 Married to actor Wallace Huo (霍建華), the mother of one shared about the rules of thumb she observes in her marriage and said that while there are bound to be conflicts and bickers from time to time, quarrels are not necessarily a bad thing, and might actually help to improve the relationship. “But you must choose the right place and time to quarrel, and definitely not do it in front of the kids,” Ruby added that couples should avoid talking to each other with raised voices, and that bodily conflict is an absolute no. “Even if it’s just bickering loudly, we should avoid doing it in the kids’ presence,”

Sharing her thoughts, Ruby said that just witnessing one or two conflicts between parents are enough to affect the kids, who might wonder “Why are my parents quarreling all the time?” When they enter adulthood, they might mirror these behaviors and treat their partners the same way. The actress added, “Doing by example is very important, we should all try our best to be a good role model by controlling our tempers,”

Ruby believes that given kids’ sensitivity, they are likely to sense that things are amiss even when the adults give each other the cold shoulder; they might wonder why dad and mom are not talking to each other, or not taking their meals together, might start to worry and might even reproach themselves. Thus, Wallace and herself would pay attention to such details in day-to-day living. She sums up, “Everyone’s tempers and personalities differ, there’s bound to be unhappiness, when you feel like flaring up, everyone can try to take a step back each, since you live under the same roof, it’s really not a big deal.”