Returning back to the music industry this year, Ruco Chan (陳展鵬) released his new song “Zero Year”<零歲>  dedicated to his daughter, Quinta. The song arrived just in time for Quinta’s second birthday in April. With his daughter growing up, he is ready to add another baby to their family. 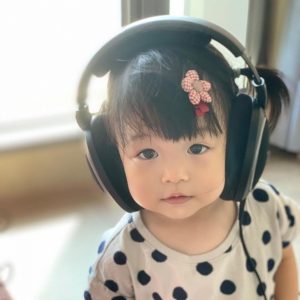 Ruco revealed that he is in agreement with his wife Phoebe Sin (單文柔) to expand their family. “Our daughter is very well behaved and understands a lot. She can have a younger brother or sister to play with if we have another child. She can also learn how to take care of someone.”

When asked if Phoebe is ready, Ruco laughed, “She is scared that I am not ready. She wants me to be ready every day.”

Since getting married, Phoebe has lessened her filming schedule but remains an active social influencer. Whenever she is ready, Ruco supports her return to television. “A lot of people are fighting to take care of our daughter. Our relatives said that they would help watch her if we needed to work. However, I can see that my wife is very happy and really enjoys taking care of her, so the decision is really up to her. I don’t mind at all as long as she is happy.”

Ruco is Currently Filming “Guardians of the Dark”

Though he is making a comeback in music, Ruco also has his hands full filming new drama Guardian of the Night <黯夜守護者>. In one scene, he races out of his car to save Kaman Kong (江嘉敏). Based on his appearance and acting style, the character is very unmotivated. He explained, “The role says that I used to be an undercover police officer who experienced something traumatic, which causes his personality to become very pedantic and simple.”

When asked if the character is boring, he said, “Yes, I am like this in every scene. When I talk, I also look like I don’t have a lot of energy.”