Last year was a challenging year for Ruco Chan (陳展鵬), as many of his dramas were delayed for broadcast and his anticipated return to the music industry was put to a halt because of the pandemic. Signing with music label Sky Team Entertainment last week, Ruco finally returns to his roots as a singer from 21 years ago.

Making his appearance as “Big Brother” at Sky Team Entertainment’s press conference, Ruco was accompanied by TVB executives Ho Lau Chuen (何麗全) and Virginia Lok (樂易玲). Asked why Ruco did not sign with TVB’s subsidiary Voice Entertainment instead, he revealed that Ms. Lok had asked him to sing again four years ago and made the arrangements for his new music contract.

“When TVB asked me to become a singer again, I was a bit conflicted. When an actor sings off key, it’s acceptable, but it’s not the same for a singer,” Ruco confessed his worries. Furthermore, his acting schedule can be erratic which leaves him little time to practice singing, but “the right timing” this year convinced him to pursue his music dreams again. 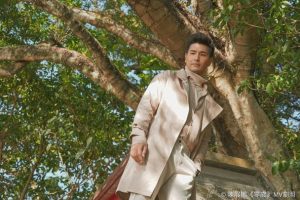 His new company, Sky Team, regards Ruco as an important asset and reportedly spent a six-figure sum promoting his new song “Zero Year” <零歲> even during the pandemic. A global live-streaming show is in the works for Ruco to perform his new song for worldwide fans, and the music video will be released soon.

The new single is written by Schumann (舒文), who won the CR2’s Best Producer award, and Riley Pong (林若寧) who won CR2’s Best Lyricist award last year. With the golden duo at helm, they tailor made a song for Ruco which has a very different feel from his previous drama theme songs. The song talks about children, as he wanted to share his feelings as a father and dedicate the song to his daughter.

Other singles are also in the works, but Ruco said his album will not be ready for release this year.

Three Dramas to Air This Year

Since winning Best Actor in 2016, Ruco has not appeared in many dramas and his fans misunderstood that he was staying home to raise his daughter. However, this year viewers will see a lot of Ruco on screen again.

Three of Ruco’s dramas are awaiting broadcast, including Chinatown <唐人街>, Sinister Beings <逆天奇案>, and I’ve Got The Power <超能使者>. He is currently filming police drama Guardians of the Dark <黯夜守護者.> with Alice Chan (陳煒).  TVB has plans to release two to three of his dramas consecutively to help him maintain a high level of popularity this year.