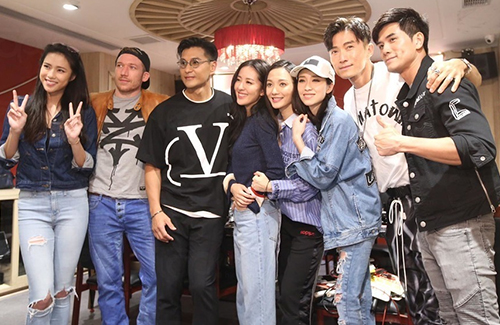 Ruco, who became a father during the filming of Chinatown, expressed his happiness that he finally gets to go home and spend time with his “reincarnated lover.” The actor his wife Phoebe Sin (單文柔) had welcomed their daughter, Quinta Chan (陳羽媃), on April 14th.

“Every time I leave the house, I think of my daughter,” said Ruco. “But I can’t slip. It’s important to stay focused, especially when it comes to this job. Chinatown is an action-packed series. Usually I spend the bulk of my time trying to memorize dialogue, but this time it’s the choreography. A wrong move can cause injury.”

Ruco had exerted a great amount of physical strength and endurance to film Chinatown, admitting, “It’s difficult filming for TVB. You probably have the hardest acting job in the world, but that has always been its culture. That’s why Hong Kong actors are known for being so industrious and capable.”

His schedule was so packed that he only managed to catch a small glimpse of his daughter every morning. “I wouldn’t return home until around 4 or 5 am. My daughter would still be sleeping.”

Ruco said the process of seeing his daughter had felt like “visiting in the ICU,” explaining, “There’s a lot of precautions I had to take before I can hold her. It’s like being in the ICU. I’d have to disinfect myself, then take a shower, and then take care of many other things. I’d have to get our helper, postpartum sitter, or my wife to help me take care of her. It’s a hassle.”

Now that Ruco’s filming obligations have completed, he can finally relax at home and fulfill his duties as a father.