Former TVB actor, Sammul Chan (陳鍵鋒) gave a very honest church testimony a few days ago and revealed his past 20 years of unhappy experiences. For the first time, he disclosed he was unknowingly the third party twice, which made it difficult for him to trust people. He said, “Humans are terrifying animals.”

Sammul has been in the entertainment industry for 20 years and participated in many popular TVB dramas. However, his reluctance to sign a contract with TVB made his career stagnant, so he ended up switching his focus to the Mainland China market in 2010. When he faced hardships at work, he went drinking with a group of friends as often as three to four nights a week.

“I met this girl, and she became my girlfriend. Later, her female friend asked me to go out for a drink and said, ‘Do you know she has a husband?’” Sammul recalled. “I didn’t know. I never suspected her because she was able to come out and meet up with me every day. But it turns out her husband worked in Mainland China. Once I found out, I ended the relationship immediately.”

However, a similar incident occurred again, and this time, the person disappeared after he found out. In turn, the actor became unfriendly, disliked socializing, and often hid himself. “It’s hard to believe people after what happened,” Sammul admitted.

It didn’t help that reporters accused Sammul of being gay after they photographed him at a gay party. He was even said to be fighting over Ron Ng (吳卓羲) with Ella Koon (官恩娜) when they were filming the 2007 TVB drama Survivor’s Law II < 律政新人王II> together.

“It was so ridiculous,” Sammul expressed. “I was speechless. Perhaps I had to commit suicide for them to take me seriously! If they were actually able to photograph me making out with a guy, then I will have nothing to say.”

His tough experiences led him to think about committing suicide. “Fortunately, it was just a thought in passing, but it was a sign of danger,” he said.

The event allowed him to re-examine his life, reconnect with his faith, and enroll in a theology course. 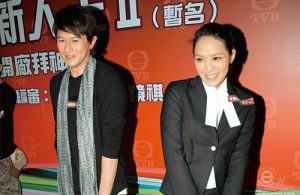 Sammul Chan and Shirley Yeung appear in a promo for their new drama, “Elite Brigade IV”.

Sammul Chan suffered a persistent high fever after getting bitten by a mosquito in Thailand. Fortunately, it was not the Zika virus.