Actress Selena Lee (李施嬅) recently flew to Toronto to shoot the third season of the Canadian web drama, Blood and Water. Due to the raging coronavirus, Selena made sure to take the proper safety measures for her flight by bringing a sleeping mask, face mask, air humidifier, and hand sanitizer. “The film crew was a little worried. Since the number of confirmed coronavirus cases are increasing, they asked me some health questions like if I have been to Mainland China recently,” the 39-year-old shared. 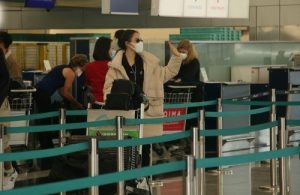 “I’m trying to be as safe as possible because I have a costume fitting the second day after I land,” she revealed. “Even though the people aren’t worried, I want to make sure I’m healthy and won’t affect other people.”

Selena said she’d be more careful on the plane by washing her hands often. She hopes to sleep for 10 hours straight and skip the meals.

As for filming preparations, Selena said she is reprising her role as an assassin, but this time her character is not a villain, and there will be action scenes. Most of the shooting will take place in a far-flung urban area that’s about an hour and a half away from the city by car. Selena will have plenty of time to rest, as she’ll only work weekdays for eight hours a day.

She’ll be in Canada for five weeks to film eight 30-minute episodes, and leave on March 31. However, she hopes to finish quickly and return to Hong Kong earlier, as Forensic Heroes IV <法證先鋒IV> producer Mui Siu Ching (梅小青) wants her to watch the finale with the whole team.