Back in 2019, actress Selena Lee’s (李施嬅)  Barrack O’Karma <金宵大廈> was the talk of town, garnering her the Most Popular Female Character award at TVB Anniversary Awards, just before she ended her TVB contract and signed onto American talent agency, Authentic.

After leaving the safety nest of TVB, Selena secured a key supporting role in Canadian series Blood and Water, and was even recognized for her acting with not one, but two International Best Actress nods for US Short Once More. The Hong Kong press headlined local entertainment news with “Selena breaks into Hollywood” and the like, as she looked set to bring her career to greater heights.

Keen to ride on the overwhelming success of the supernatural-themed series to film Barrack O’Karma 2 <金宵大廈2>, TVB invited the 40-year-old to reprise her popular role as “Coco” Yeung. After years at the station with little recognition, Selena’s response then was alot more lukewarm. She told the press that doing the sequel was not a sure thing, since her Canadian filming schedule is rather tight, and also brought up other considerations such as whether her filming schedules could fit, the quality of the script, and whether the original cast and crew would be back. “I’ve already signed onto another agency and have quite a few work commitments, if filming really starts, we’ll have to discuss the mode of cooperation again, but I hope it the original cast and crew could be back,” she said. 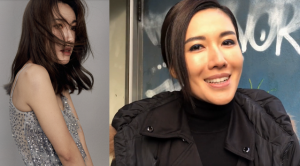 Alas, the worsening Covid-19 situation in Canada led to lengthy delays and on-off filming for her series Blood & Water, given the state emergency declared. It took a few months to finally wrap. However, work opportunities for Selena became few and far between, and Selena eventually headed back to Hong Kong, where she hopes to have more work. In the meantime, she has also joined many celebrities in appearing “live” on Chinese social platforms to promote the sale of products, as side income.