Simon Yam (任達華) and Him Law (羅仲謙) star in Little Q (小Q), a new heartwarming film about the life of a guide dog. Based on Ryohei Akimoto and Kengo Ishiguro’s novel, The Life of Quill, the Seeing-Eye Dog, the film premiered on August 15. Steering clear from the novel’s more tear-jerking moments, the Chinese film adaptation instead focuses on the uplifting bond between humans and their canine friends. Prior to the release of the film, Him and Simon accepted an interview and discussed their own experiences and perspectives about dogs and pets.

Preparing for the Film 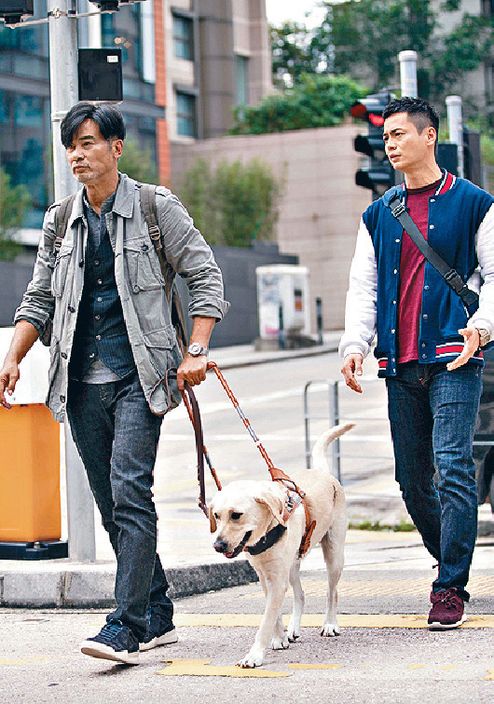 Him revealed, “When the director was casting, the first question he asked was whether we had dogs. He did this because he felt that those who have dogs are more patient and will have the fortitude to film scenes with the dog, which will greatly aid in the progress of filming. Prior to filming, I went to the Guide Dog Association and underwent a two-month training to learn how to train guide dogs for the blind. I witnessed how they helped their families. When it came time to filming, it was naturally more comfortable and a smoother process.”

Simon, who portrays a blind man in the film, found this to be a challenging role because it was his first time playing the role of the blind man. “When I first attended a school for the blind, they blindfolded me and took me into a room. They gave me four minutes to fumble around and tell them how big I think the room is and what is in the room. When I entered the room, I felt very panicked. I walked alongside the wall, running into things and fumbling. That process made me lose sight of direction and I felt very helpless. It made me realize how someone must feel when they lose their sight. That vulnerability can really make someone feel frustrated. About three weeks before we started filming, I took the guide dog that will be starring in the film to live with me. We developed a close bond, which allowed us to be more comfortable and natural around each other when filming started.”

When reading the script, Him felt that it was a very touching story and thought his character was quite promising. After filming, however, those insights and feelings have expanded, and it was only then that Him felt the full influence and poignancy of the film. “As a Hong Kong actor, I can definitely do more for the Hong Kong Guide Dog Association. I hope that after viewing the film, the audience can have a better understanding of guide dogs and the important job that they do. Hopefully this will reduce the number of stores that disallow guide service animals from entering.”

Simon recalled one of his most touching scene in the drama was when he cradled Little Q. “In the past, I have had a similar experience. Twenty years ago, my husky was 12 years old. His hind leg did not function properly, so he would lay still and not move for long periods of time at home. The veterinarian told me that he was incurable. In the end, I had to make the very difficult decision to euthanize him. I carried him in my arms across the parking lot and into the building, which took about 10 minutes. The moment when I left was very similar to the ending scene of the film. I walked his last path with him. That feeling is so familiar. Actually, dogs are our forever friends, especially guide dogs. We give them ten years of our life, and they give us their entire lives.