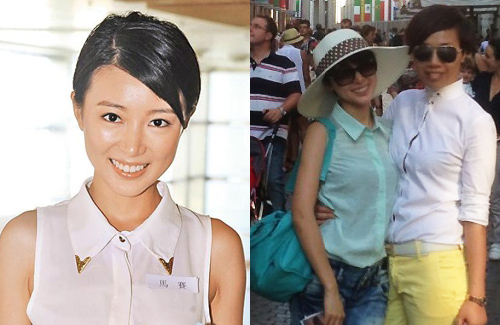 After a video of Sire Ma (馬賽) dancing in lingerie surfaced on the Internet, she implied she was betrayed by a former lover who had leaked the contents. Filing a police report and holding a press conference, Sire said she had loved and trusted the wrong person. But her lesbian ex-lover, Wang Ziqi (汪子琦), suggested otherwise by calling Sire a forever-cheating liar. The mainland businesswoman further revealed that she and Sire had filmed a sex video together.

Ziqi spilled the lingerie video was taken with Sire’s camera, contrary to the actress’ earlier statement that she did not own the contents. Ziqi claimed it was Sire’s own idea to dress in the peekaboo lingerie outfit in their secret hotel rendezvous in Shanghai. Their relationship was kept secret since Sire knowingly became involved with Ziqi, who was married to wealthy mainlander, Laura Lee.

“That night in Shanghai, Sire asked me if I could head to her hotel after work. She said she had a surprise for me. As soon as I entered the room, she was already dressed [in her lingerie]. She told me she danced in the Hong Kong pageant and wanted to show me her moves.”

Ziqi is afraid that their joint explicit content will be leaked publicly. Asked if she and Sire had taken a sex video and photos together, Ziqi said, “Yes! She has our intimate photos on her camera, so I’m afraid my own photos will be exposed.”

Although Sire continued to send Ziqi nude photos of herself via WeChat, Ziqi deleted them after their breakup.

Ziqi also found it ridiculous that Sire claimed she was under alcoholic influences in the lingerie video, since she never drank alcohol in their three-month love affair. Ziqi shared, “Sire said she suffers an endocrine disorder from too much pressure while filming for TVB. She has allergies and would constantly develop acne on her face. She is a long-term consumer of Chinese traditional medicine. She doesn’t even eat seafood, so why would she drink?”

Furthermore, Ziqi expressed she is unsure if she was the only one who had received the lingerie video from Sire at the time. Sire had sent flirtatious text messages to a senior Hong Kong male artiste past his fifties, and because of this, the women slapped each other in an argument. While Ziqi declined to name the actor involved, Sire reportedly acted flirtatiously with Damian Lau (劉松仁) on the set of Silver Spoon, Sterling Shackles <名媛望族>.

Ziqi added she is unafraid of police investigation in the leaked video case, since she has done nothing wrong. Since Ziqi is now suspected to be the person who has leaked Sire’s lingerie video, Ziqi felt it was critical for her to clear her own name as it involved legal matters.

Ziqi’s biggest regret is her impending divorce with Laura due to Sire’s involvement. In response to Sire’s cries that she has loved wrongly and misplaced her trust, Ziqi retorted, “First of all, may I ask whom she has ever truly loved? I’m the one who has loved and trusted the wrong person. Because of her, I did many ridiculous things and lost my lover of seven years! Tell me who has loved the wrong person!”

When asked what kind of person she believes Sire to be, Ziqi exclaimed Sire would always be a cheating liar in a fake mask who has committed hideous acts.