Although Sire Ma (馬賽) tried to put behind her breakup with Mainland businesswoman Wang Ziqi (汪子琦) and steamy lingerie video, Sire’s scandalous past continued to trouble her. Last week, a netizen exposed a text exchange in which Sire discussed her sexual encounters with Ron Ng (吳卓羲) and Wang Ziqi.

Wang Ziqi Was a Fierce Lover

Weibo user Chris_lee72 uploaded a private text exchange in which Sire spilled her promiscuous behavior to a trusted confidante. Chris_lee72’s intention was to force Sire to leave the entertainment industry.

Through private Weibo messages with a close friend who is a TVB actress, Sire apparently had confided her sexual experiences. On her relationship with Wang Ziqi, Sire hinted that it was her first time making love to a woman. They checked into a hotel room together and Ziqi seduced her with a bottle of red wine, claiming that she was unhappy with her partner, Laura Lee.

Sire also mentioned that Ziqi was a fierce and demanding lover, “Before we slept together, she was very good towards me. After we became intimate, she treated me like a sex slave and wanted to do it every day! She was like a starving wolf!”

Although Ziqi badmouthed Sire for being materialistic and cunning, Sire shared her personal outrage with her confidante, “She cheated my love. I thought I had found true love and a lover I can rely on, but that wasn’t the case! She betrayed her wife and said I was the third wheel instead!”

Sire stated that she “had slept with various men from different backgrounds” and admitted that she has an open attitude in sex. In the text message, Sire wrote, “I like how ‘Cheuk Hei Gor’ [alluding to Ron Ng 吳卓羲] makes love. He is very big and tall, so there is more sensation during [love-making].”

Sire Has Backup from Powerful Party

After the scandalous private text messages were revealed on Sire’s Weibo blog, she quickly deleted them and claimed they were fabricated. TVB management fully backed up Sire’s claims and supported her actions in letting the police handle the matter.

TVB has demoted many of its artistes over lesser issues, and for Sire to be given a second chance despite her severely tarnished image, it is rumored that the actress has a powerful politician in Malaysia backing her up. An inside source spilled, “Because the party is prominent in the Southeast Asian market, [TVB] has no choice but to honor the plea.”

He even opened a museum in Beijing for his superhero and comics character figure collection.

Ron and other celebrities try to help animals at shelters.

Ron has a long list of requirements he desires in a girlfriend, and cites her ability to accommodate him as a top priority. 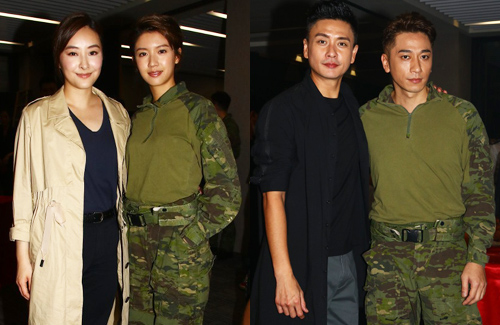 Jeannie Chan will portray Bosco Wong’s love interest, and Sisley Choi will have a tearjerker romance with Ron Ng.