Sire Ma Needs to Rely on Family for Financial Support 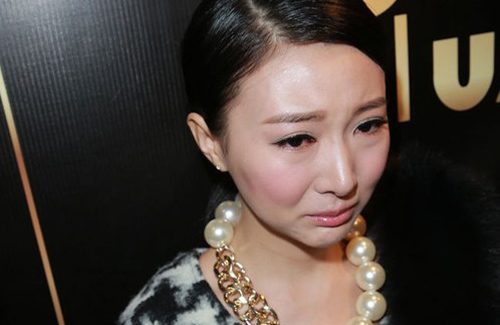 After the video of Sire Ma’s (馬賽) seductive lingerie dance was leaked on the Internet, the TVB actress has been keeping a low profile. Since the scandal broke, Sire bravely attended her first function as a model for a fashion show today.

No Jobs Lined Up

Appearing a lot calmer than during her press conference on July 24, Sire attracted many questions from the reporters. With her hands together in an apologetic manner, Sire shared her feelings and thanked her friends for the continuous support.

Sire said, “I’m actually very nervous today, but I want to thank Elaine Yiu (姚子羚) and my manager for encouraging me backstage. This job was arranged a while ago and as an artiste, I have to maintain my professionalism, and that’s why I attended. I’ll work hard and do my best. I actually appreciate the fact that the company didn’t cancel my job because of the incident, and I’m very thankful to have this opportunity. I don’t have other jobs right now!” Sire added that she does not know how long TVB will put her on hiatus.

Despite the halt in her income, Sire has to pay her living expenses and lawyer fees to halt the media distribution of her intimate video. Sire tearfully stated that she would have to rely on her family for the rest of the year for financial support. Taking a break from the negativity and while waiting for the tabloid reports to die down, Sire enrolled in a course to increase her knowledge in the meantime. She will also be spending more time in Mainland China, where her parents currently reside.

Afraid to Read the News

Sire’s lesbian ex-lover Wang Ziqi (汪子琦) claimed that Sire had sent flirty text messages to a senior actor.  Although Damian Lau (劉松仁) was the top suspect, he denied the accusations and applauded Sire’s courage in handling the situation.

Feeling miserable for causing so much trouble towards her colleagues,Damian, Sire stated that she does not possess the racy videos and has never sent them to anyone. Sire has been afraid to read the news in case of any more false reports and resorted to asking her friends to keep tabs on the tabloids.

Will Continue to be Strong

Sire revealed that her bad breakup with Ziqi and subsequent video scandal have taken a large toll on her mental health. During the darkest times, Sire had suicidal thoughts but managed to pull herself up after receiving unending love and support from her family and friends. Since January, Sire started seeing a psychologist to treat her depression. The week that her lingerie video was released publicly delivered a severe blow on Sire. “It has been extremely difficult to endure, the most difficult week. I didn’t listen nor look at anything. But I know that no matter what happens, I can’t harm myself because there are still many people who love and support me.”