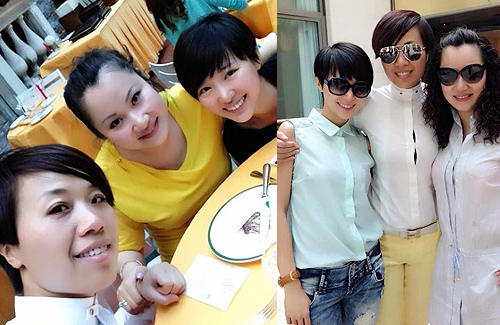 The Sire Ma (馬賽) lesbian scandal continues. In a viral video that surfaced online, Sire was seen kissing mainland Chinese film producer Wang Ziqi (汪子琦) on the streets of Shanghai. Aside from Sire being branded a liar for denying the romance earlier, her career is at risk as TVB asked her to take two months rest and vendors dropped her from promotional events. Sire’s ethics are now under fire, as Wang Ziqi’s ex-girlfriend, Laura Lee, claims Sire stole her lover.

American-Chinese entrepreneur Laura Lee is Wang Ziqi’s business partner; the couple had dated for one year. They were still involved in a relationship when Sire accompanied them on a trip to Europe in August. Laura said she was fooled by Sire’s innocent facade, but later discovered Sire had “the appearance of a white rabbit, with a coat of mercy, but hides a knife within.”

Laura was initially trusting of Sire and had regarded her as a friend. Sire was dating mainland businessman, Jian Jianfeng (簡建峰) at the time, thus Laura did not suspect her real intentions. “Halfway through our European trip I was beginning to sense something weird, because Sire randomly said during a meal, ‘My mom is worried that I might like women one day.'” Laura added, “Now I understand. She was sending hints to Wang Ziqi. When we came to our last stop in Rome, she suddenly changed her clothing style and dressed sexily. When I rested in my room, she went out shopping with Wang Ziqi.”

Laura further implied that Ziqi had been planning to cast Sire in a movie she was producing. She also implied that Sire did not pay for any expenses during their trip to Europe. Ziqi also gifted Sire with luxury items such as Cartier jewelry during the trip.

After the trip, Laura left for the United States to handle a personal matter. Sire secretly met up with Wang Ziqi in Shanghai during this time. Laura said, “Sire Ma lied to me. She told me she was going to Chongqing to visit her mother. When I returned to Shanghai, I discovered that Wang Ziqi changed all of her passwords in her phone. She constantly received WeChat messages, and they were all from Sire Ma.”

Laura confronted the pair in a coffee shop in Hong Kong. Sire admitted that she has been dating Ziqi since September. “She also told me that Wang Ziqi was happier with her and demanded me to back out. She said Wang Ziqi didn’t love me and being together would be useless. I was beyond embarrassed.”

Laura said she was disheartened at Sire’s attitude. “She won my trust first and then stole from me behind my back, ruthlessly.” Though Laura is hurt and disappointed with the breakup, she will remain friends business partners with Ziqi. “We’ve been through a lot together. I always wish nothing but the best for her.”

Asked if she would forgive Sire, Laura said, “Let’s put it this way – she is not qualified to even be in my memories, but injuries need time to repair.”