Upcoming TVB fantasy-comedy drama Super Emissary <超能使者> has been shooting since May. It’s never easy to shoot an action series during the summer, and Ruco Chan (陳展鵬) is experiencing this first-hand, once again.

Produced by A Fist Within Four Walls <城寨英雄> creator Jazz Boon (文偉鴻), Super Emissary is about a group of blue collar workers who use their mysterious superpowers to save their neighbors from thugs. The drama is Ruco’s second leading series with Natalie Tong (唐詩詠) since Chinatown <唐人街>, which is slated to air this fall.

Recently, the duo were spotted filming the show near Yuen Long’s Nam Sang Wai. The scene is about Ruco and Natalie, who play background extras, getting yelled at by the director. Natalie faints in the middle of filming, and Ruco has to carry her to the ambulance. The scene took several re-shots, and Ruco had to carry Natalie “princess-style” seven to eight times in the sweltering Hong Kong heat. Needless to say, Ruco was having a very difficult time. 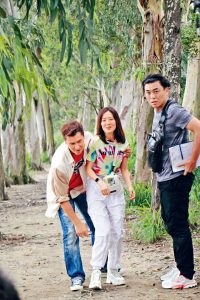 “I was definitely okay,” said Natalie with a laugh when the duo were later interviewed. “Are you okay?”

Ruco said he nearly collapsed having to carry Natalie, but stressed that it had nothing to do with Natalie’s weight. “I’ve been getting off work late the past two days, and I’m not eating enough. It definitely has nothing to do with Natalie. She’s very light. If I have to complain, I’m going to complain to the director. He had too many camera angles planned. He owes me a meal!”

On working with Natalie again, Ruco said it’s been an improvement since Chinatown. He explained that he has less fighting scenes in Super Emissary, so the filming process has been relatively easier.

“I play a character who always gets yelled at,” said Ruco with a shrug. Having to play the one who is doing all the shouting, Natalie said she nearly lost her voice several times.

Asked to compare carrying Natalie to carrying his own daughter, Ruco stressed again that Natalie isn’t heavy at all. He added jokingly that he was able to train for the scene by carrying his daughter, who is now over a year old.

“But it still has nothing to do with weight,” said Ruco. “My daughter is a lot stronger now, so she is able to accommodate me when I hold her. When I carried Natalie, she had to be dead weight, so it was much more difficult.”

Natalie joked, “Not completely! My core was tucked!”

Super Emissary is Natalie’s first comedy. She has been enjoying the drama so far, and especially enjoys being surrounded “by muscle.” She said with a laugh, “I get to show some muscle too, but I’m not that fit yet. Even the producer said I may not pass the test!”

Natalie pointed out that the Super Emissary cast has been blessed with good luck the past year, as Ruco, Jazz Lam (林子善), and Joel Chan (陳山聰) are now new parents since their last collaborations. Asking if there is a possibility that more news will come for Ruco, Natalie said, “I actually think Grace Wong (王君馨) will be next!”