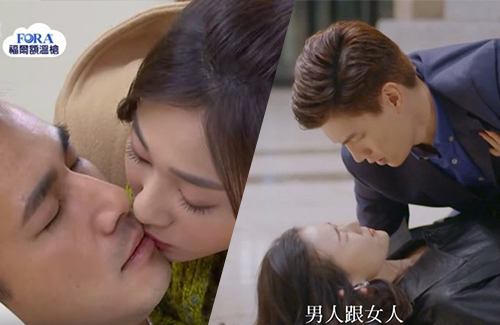 The new coronavirus outbreak has pushed the Chinese film and television industry to halt all productions for the time being, significantly slowing down China’s economy. Though other Asian economies aren’t nearly as impacted, they’re definitely on high alert and monitoring the outbreak’s progress.

Taiwan only has 18 confirmed cases of the Wuhan coronavirus, but due to their close proximity with mainland China, the cases may increase and citizens are all advised to stay home as much as they can. Many Taiwanese dramas have also reportedly decided to either take out or tone down their actors’ kissing scenes out of respect for the universal precautions that everyone is advised to take as preventative measure.

In a new episode of the soap opera Golden City <多情城市>, Mia Chiu (邱子芯) and Jun Fu (傅子純) were supposed to have a passionate kissing scene after Jun confesses to her. It was said that the directors changed the scene last minute and only required Mia to lightly kiss Jun on the lips for a brief second.

Golden City producer Louis Hsiao (蕭大陸) said they did not “purposely increase or decrease” the intimate scenes, but did point out that they would try to avoid doing them, expressing that the eight o’clock time slot is for family-friendly programming anyways. Mia added that the light kiss was more appropriate for the scene regardless.

In The Wonder Women <跟鯊魚接吻>, main couple Aviis Zhong (鍾瑶) and Wes Luo (羅宏正) barely had any intimate contact in the sixty or so episodes that were aired, with the exception of Wes catching Aviis when she fell. Aviis later said she got sick with a cold after shooting that scene. Wes joked that he would have to drink “water of life” to sanitize himself.

EBC, the producers of idol drama Sweet Family <美味滿閣> starring Kingone Wang (王傳一) and JR, did say however that they will avoiding intimate scenes for their main couples. “We haven’t gotten there yet in the script, but when that time comes, we will try to avoid interactions that are too intimate.” They also said they will avoid filming at crowded locations, and will stock up face masks for the cast and crew.

This article is written by Addy for JayneStars.co