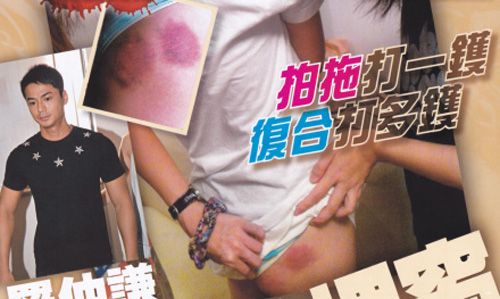 The turbulent emotional conflicts between Theresa Fu (傅穎) and Him Law (羅仲謙) started in December 2010, when Theresa claimed that Him was a liar and cheater in love. Despite reconciling, the pair had a physical dispute over Him’s continued cheating in the relationship. On August 20that a public event, Theresa shockingly revealed that she had confronted Him about cheating with two other women in their former relationship. In addition, Theresa suffered emotional and physical injuries in her one-and-a-half year relationship with Him.

It was understood that during their break up argument, Theresa was beaten by Him, with prominent bruises found on her arms, legs, and right buttocks. When Theresa’s friends visited her house and discovered the extent of her injuries, they urged her that a man’s beating of a woman should not be condoned. Theresa’s friends took photos of her bruises and recommended that she alert the police. Theresa refused the suggestions of her friends’ for reasons to be revealed later.

A Turbulent Relationship All Along In January 2010, Theresa allegedly started dating her Filmko colleague, Him Law. The couple got along sweetly until December 2010, when Theresa exposed Him for dating another woman in their relationship. Without having acknowledged their relationship in the past, Theresa suddenly unilaterally revealed that she broke up with Him. Suspicions followed that Theresa made such statements to generate publicity.

Allegedly, Him constantly begged to reconcile with Theresa and promised to break off from his girlfriend in Beijing. An inside source revealed, “Everyday, Him called and sent text messages to Theresa, begging her to go back to him! He swore that if he were to hurt Theresa further, he will never become famous in his lifetime! He promised to never break her heart again. For the past few months, he continued to sweet-talk her. Theresa’s heart softened and gave him another chance, believing that he would not lie to her again.”

Lies On Top of More Lies

In April 2011, Him successfully reconciled his relationship with Theresa despite earlier arguments. The first thing he promised Theresa was to turn on the ring tone in his cell phone. An inside source revealed, “From the first day they dated, a long-distance number from mainland China often called Him. However, Him explained that there was a gay man from Shanghai who was interested in him. He said that he was only entertaining the gay man’s phone’s call and Theresa did not suspect him. When Theresa discovered that the ‘gay man’ called very frequently, she started becoming suspicious.

“After Theresa and Him reconciled since their December 2010 argument, he turned on the ringer of his cell phone to gain her trust. In July 2011, Him started relapsing again, which made Theresa suspicious. Checking his cell phone, Theresa found several suspicious text messages,” an inside source revealed. When Him saw Theresa checking his cell phone log, he cursed explosively. An insider noted, “At the time, Theresa asked Him, ‘You said you will never lie to me again?!’ Theresa thumped her hands on Him’s chest. With one hand, he grabbed his cell phone back, while he shoved her on the floor with another hand.”

During their argument, Theresa threatened to kill herself. “Theresa had no strength to fight back and shouted, ‘If you hit me again, I will die before you!’ When Theresa attempted to get up again, Him pinned both of her arms behind her back and shoved her on the floor again.

“Him suddenly picked up Theresa in his arms and took her into the bedroom. Theresa struggled and slapped Him on the face. Him shouted, ‘This world has so many [expletive] men who are the same. Do you see woman talking about it? I can [expletive] kill you with one punch!” Him threw Theresa on the bed, whereupon she bumped against the window and Him finally walked out,” an inside source revealed that Theresa and Him officially broke up after the argument.

Him injured Theresa on July 22nd but she did not tell anyone what happened. On July 23rd, several good friends visited Theresa’s home. Freshly out of the shower, Theresa’s arms and legs were full of bruises. Her friends asked her what had occurred. “We asked her what happened several times. One friend asked whether Him Law had hit her. She remained silent and hoisted up her shorts, revealing the severe bruises on her butt. Several of her friends grew extremely angry and one friend took some photos with her cell phone, urging Theresa to call the police! Theresa shook her head and the friends scolded her for being foolish. Her friends continued to urge her to call the police.

“Finally Theresa said that when he accused Him of cheating [in December 2010], everyone thought she was fabricating the news. In addition, Him said he possessed a good public image and everyone would believe him instead. The friends could not change Theresa’s mind and sought out her elder sister, Christina, instead. The friends showed the photos with Theresa’s bruises to Christina, who urged Theresa to call the police. Theresa was very stubborn and refused to do so.”

Not The First Time Striking Theresa

Allegedly, it was the second time in which Him had hit Theresa. The first time Him hit Theresa was in their first year of dating. “At the time, Theresa lived at Island Resort. One day, Theresa had an argument with Him and called a friend, who had Theresa’s key and immediately went to her house to check on her. When the friend opened the door, Theresa was laying on the floor. Taking in the situation, the friend pointed at Him and shouted, ‘What gives you the right to hit my friend! Leave immediately! You dare to hit her? Women are for you to beat up? How do I know if you accidentally kill her in a rage one day?!

“At the time, Him explained that he had an argument with Theresa while they were eating congee. They shoved each other and Theresa accidentally spilled some congee on his chest. Him fell into a rage and slapped Theresa on the face and shoved her on the floor. After hearing the story, the friend asked, ‘You hit Theresa over spilled congee? Do you have a compulsive violent tendency?’  Him continuously begged Theresa for forgiveness, kneeling down to promise there will not be another time. Finally, Theresa agreed to put aside the incident,” an inside source recounted.

Him indicated that Theresa often checked his cell phone and did not trust him, which made it impossible to continue the relationship. In fact, Theresa indeed has checked his cell phone.  “Since Him lied to Theresa once, she had reservations towards him. After they reconciled, she looked at his cell phone once. She did not see any female names come up in the caller ID log. Him never put in the names of his contacts and only recorded the telephone numbers. When Theresa saw the text message, she did not know who was the person that had sent it.”

Trust should be mutual and its absence should be held accountable between both Theresa and Him. “It’s easy for Him to become jealous. Whenever Him called Theresa while she was out with friends, if he heard any male voices at the gathering, he would call Theresa’s friends who were also present to ensure tthat the other men do not get close to her. If Him could not find Theresa, he would call her friends. His suspicious nature was high. He often asked Theresa’s friends to praise him in front of her, describing him as a handsome and good man.”

Theresa And Him Apologize At Press Conference When the reporter asked about her bruises from Him Law, Theresa sidestepped the issue, “When my mother saw that I was hurt, she was heartbroken. This made me feel very hurt. I am very sorry to them.” However, Theresa could not shed any tears.

Theresa described her relationship with Him as “a heavy feeling that hurt her deeply.”  She added that she had to “leave behind the heavy burden and wipe away its shadow” before departing to Beijing for her career development. Apologizing numerous times for breaking the news to the media without Filmko’s knowledge, Theresa said, “I feel extreme remorse. I promise it will not happen again. Whatever happens from now onwards, I will discuss it with my company first.”

Unfortunately the current edition of Next Magazine featured a sensational story about Him Law throwing Theresa Fu against the window, which heavily bruised her butt. In addition, the photos revealed that Theresa had large bruises on her legs and back as well. When Theresa stood up to leave the press conference, reporters asked how her bruises were. Theresa only mumbled, “Mmmm” in response before leaving the venue and refusing to answer additional questions. When she arrived home and stepped out of the car, there was still an apparent bruise remaining on her left calf.

After Theresa’s apology speech, Him Law spoke before the media. Appearing quite nervous, Him sighed several times. He apologized to his colleagues and company that were affected by the situation. Asked whether he had apologized to Theresa, at first Him did not respond. He said, “When I was together with Theresa Fu, we had happy times and also arguments. I do not want to reveal the details. Under all circumstances, it is wrong to have any physical harm inflicted upon her. I apologize to Theresa Fu.”

Him stressed that he did not inflict serious injury upon his ex-girlfriend, “I deny beating her viciously. I also did not date four women simultaneously!” (Did Him date two women at the same time?) “No, I didn’t.  I have broken up with my ex-girlfriend in Beijing. She already has another boyfriend.” Asked whether Him will be cooperating with Theresa in the future, he noted that their company will make the arrangements.

Reporters asked how Him had hit Theresa, whether he felt he was a “Cheap Man” and a player. However, Him declined to comment in response to those questions. Excerpt from Next Magazine #1120  and Oriental Daily

Jayne: Theresa’s bruises on her butt look very severe. She must have been thrashed several times against the window or hard object with force to achieve such severe bruises. Not the type of bruise that you get simply from one light collision. The bruises look like they hurt a lot when fresh.

While Next Magazine may have sensationalized some details, the overall account of Theresa and Him’s physical argument seems consistent with Theresa’s earlier account. I believe her. Now Filmko is eager to quiet down the incident. Fortunately, Theresa’ friend took a cell phone photo of her earlier condition and gave a “tell-all” account to the press.